Chris Butler is proud of what he calls “his little two-and-a-half hit wonder,” The Waitresses.

In the early 1980s, the experimental new wave band from Akron, Ohio, made its mark on the MTV generation with its signature hit, “I Know What Boys Like,” the holiday favorite “Christmas Wrapping” and the theme song to the short-lived, Sarah Jessica Parker sitcom “Square Pegs.”

Butler formed the group in 1978 and recruited Patty Donahue to be the lead singer. As the guitarist and main songwriter, Butler was responsible for the band’s subversive wit and quirky sounds. He often wrote lyrics from the female perspective, and Donahue delivered them with a sarcastic flair.

“We went up halfway and stayed there,” Butler says from his home in Hoboken, N.J. “There was definitely some unfinished business. As a unit, we didn’t stay together long enough. I was the band leader and I couldn’t hold it together. I’d love to blame everyone else, but I can’t.

“Maybe our ambitions as players were different. I wanted this as a career. We were older than most of our contemporaries and we were earning a living, but even at 30, I was always wondering, ‘How can I keep my job?’”

They could never get over that hurdle — Donahue, for one thing, wanted to pursue acting. (She died of lung cancer in 1996 at age 40.) Their cult following, however, never faltered.

The band is finally being honored with a career retrospective, a two-CD, 30-song set called “Just Desserts: The Complete Waitresses,” released Tuesday (Sept. 24) via Omnivore Recordings.

“I’m humbled,” Butler says. “We did some good stuff. It was my baby and it was my responsibility to keep it going, but the wheels fell off too soon. We were pressured into doing a second album quickly. We were tired, we had been touring for years.

“In the end, we had modest recognition, and I’m perfectly happy with that. I got out of it alive and with no drug habits.”

Now 64, Butler has mellowed over the years about one of his least favorite holidays, Christmas, and he has “Christmas Wrapping” to thank for that.

“That song has blindsided me,” he says. “I used to be a real Scrooge. Our label at the time had some very curious acts, like Kid Creole, Suicide, real left-field folks. In the summer of ’81, they said, ‘Let’s do a Christmas album.’ That was the last thing I wanted to do, but the label was very good to us and we wanted to accommodate the head of the label.”

They recorded it and went about their business.

“I got a call from my girlfriend while we were on tour. She said, ‘Your song is blowing up like crazy on the charts, especially in Britain,’ and I thought, ‘Great, they love ‘I Know What Boys Like,’ and she said, ‘No, your Christmas song.’ So, there we were on tour, and we didn’t know how to play it. We suddenly had to learn it in rehearsals so we could play it.

“It was a ‘bah, humbug’ kind of song, but it has resonated with people over the years. For me, it was very much a gift. Whenever it comes on the radio over the holidays, I think, ‘You know, that sounds great.’ “ 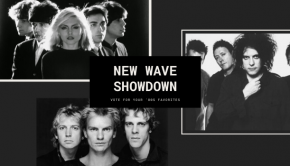