It’s only a few hours away from Van Halen’s recent world tour-opening show in Pensacola, Fla., and bassist Michael Anthony is pacing his hotel room and talking fast.

MTV cameras have been following Anthony, the Van Halen brothers (Eddie and Alex) and lead singer Sammy Hagar all day. All four now are buckled down for a slew of press interviews, while the roadies are furiously nailing down last details.

Yes, Anthony is nervous, even after 21 years with the full-throttle rock band from Southern California and 11 straight platinum albums, counting this year’s No. 1 “Balance” (on Warner Bros.).

“The only way you can prepare for a thing like this,” Anthony says, “is practice and obviously making sure you know everything, the music inside and out, because you want it to be kind of secondary. You don’t want to be thinking about what you’re going to be playing once the tour starts, because then that way you can enjoy yourself.

“As far as the physical aspects of it, you stay in shape, but there’s nothing else you can really do. I’m positive after tonight I’ll have a neck ache that’ll last a couple days (from the weight of the strapped-on bass). You really don’t use these muscles until you start touring.”

“It’s an adrenaline rush,” he says. “I still get very nervous and excited. I know as soon as we walk out on stage tonight, I’ll probably feel like passing out. I’ll feel like jelly, and then a couple songs into it, it’ll be like ‘Yeah!’ “

After Van Halen gets a few shows under its belt – and it has plenty of time, what with nearly 100 shows in the next seven months in North America and Europe – the production and nightmarish logistics will settle into a groove. From there, Anthony says, “the tour pretty much runs itself and then we can really have fun with it.”

In early February, “Balance” – Van Halen’s first studio LP since 1991’s “For Unlawful Carnal Knowledge” – debuted at No. 1 on Billboard’s album chart, perched atop the likes of Green Day, Pearl Jam, The Cranberries and Offspring. Anthony says the band never had any doubts they’d fit in.

“Ever since Sammy joined the band (in ’85), we’ve always considered the music to come first, that and just being ourselves,” Anthony says. “That’s the one thing I think is good with a lot of these grunge bands, that they kind of show that it’s long hair, short hair, long pants, shorts, that you can just be yourself and I think that’s a real positive thing. Like them, we’ve always done what we’ve wanted to do.”

In the past three years, Van Halen lost longtime manager Ed Leffler to thyroid cancer and Hagar went through a divorce. With those experiences to draw from, Van Halen laid the groundwork for the no-frills “Balance.”

“We’ve been called the ‘party band’ and all that in the ’80s, but we’ve had our serious moments,” Anthony says. “On our last album, there was a song called ‘In and Out.’ A lot of critics don’t read past the title, and they go, ‘Oh, another sexual song.’

” ‘In and Out’ was actually written about being born and dying and how much it costs. It was about a family member of Sammy’s who died in a car accident. There’s more seriousness to ‘Balance’ too.”

Anthony is as surprised as anyone with Van Halen’s longevity. They’re all friends, he says, and there are no egos.

“In the beginning, I think everyone was saying, ‘Well, gosh, the lifespan of a rock band is like five years,’ but as the years go by, we’re doing better and better. We can do this as long as we want.” 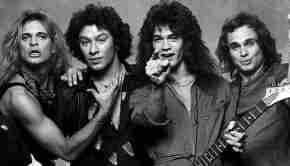 Your Music Book Store (June 13 and Beyond) →