UB40 toasts ‘The Fathers of Reggae’

After 14 years of hits (including a pair of No. 1s) and three platinum-selling albums in the United States, UB40 now finds itself stuck in a long dry spell.

The Birmingham, England, reggae group hasn’t had a chart single in America since 1993 and a chart album since 1997.

“I know there’s a big gap (between hits),” Virtue said recently. “We’re so used to touring North America, but we haven’t been over there in over two years. Hopefully, though, we can turn that right next year when we’re hoping to come back. We find that it generally helps to be over there; that usually raises our profile.”

The timing couldn’t be any better. Reggae is enjoying another revival, thanks to Beenie Man, Sean Paul and Lady Saw.

“Reggae will never die,” Virtue said. “It can be low-key for a couple of years and then suddenly, ‘Bang,’ it’s up there again. It’s had such a big influence on artists, especially hip-hop. It’s got something to offer forever.”

UB40 would know; it has sung reggae’s praises through the genre’s ups and downs since forming in 1978. The group caught America by surprise in the new-wave ’80s, cracking Billboard’s Top 40 with a remake of Neil Diamond’s “Red Red Wine” (1984). Four years later, a disc jockey in Phoenix resurrected the track after seeing the band perform the song at the all-star Nelson Mandela tribute concert; it snowballed from there, getting into heavy rotation throughout the country – and sending it to No. 1 in October 1988.

The 1990 all-covers album, “Labour of Love II,” took them to even greater heights. The LP featured reworkings of the Temptations’ “The Way You Do the Things You Do” and Al Green’s “Here I Am (Come and Take Me),” both Top 10 hits.

Just when reggae was waning again, UB40 resurfaced in 1993, when their version of Elvis Presley’s “Can’t Help Falling in Love” appeared in the Sharon Stone-William Baldwin film “Sliver.” That summer, it held a seven-week reign at No. 1.

Getting any kind of radio airplay was a bonus, Virtue says, because the group has never expected it during its entire run.

“When we first started out, reggae wasn’t even heard on the radio,” he said, “so I guess it’s not as bad today as it used to be. It doesn’t surprise me that we’re not getting played (in America), but then we don’t get the airplay over here (in England) that we used to, either. The radio stations are starting to categorize different acts like us in a certain way. They tend to B-list you or A-list you. I suppose that goes on everywhere.

“But as soon as you have a good song, that’s it – everything goes out the window. You never know when radio will latch onto something. To me, all the songs on this album are great. Of course, I’m biased, but these songs are very radio-friendly.”

Having a chance to work with their heroes made “The Fathers of Reggae” all the more special, Virtue says.

“It took us three years to finish it,” he said. “It took us that long to get people in the same place at the same time. It was really, really difficult, but I think it’s worth the wait.

“After the ‘Labour of Love’ series, this was a reverse version of that, where instead of us singing other people’s songs, we got them to sing on ours. It’s something we haven’t done before on such a large scale.

“All these songs, we’ve done them live over the years that I’m sure some people will know them. The best part of it was having Gregory Isaacs doing one of our songs (‘Bring Me Your Cup’) or Jackie Robinson (‘Don’t Do the Crime’) or Max Romeo (‘Watchdogs’). It’s like a dream come true for us.”

Amid the “Fathers of Reggae” sessions, the group completed and released the “Cover Up” album, and Virtue says they have already begun work on another LP of original material which they hope to have in the can before they tour North America.

A combination of friendship, mutual respect and a love for reggae has kept UB40 together through thick and thin, Virtue says.

“We love playing reggae music, and what better way to do something than to earn a living from it as well,” he said. “We’re very fortunate to play a style of music that’s popular internationally. We’ve been all over the world, and wherever you go, there’s always a local reggae band.”

THE FIRST RECORD I EVER BOUGHT: “My memory cells aren’t all there anymore, but I think it was probably something like ‘A Clockwork Orange,’ the soundtrack album (by Wendy Carlos). The music was incredible. It was the first time people had heard the synthesizer used like that.”

THE FIRST CONCERT I EVER WENT TO: “Jimmy James and the Vagabonds at a club in Birmingham called Barbella’s. They’re a great R&B group, and he’s still going strong today. It was the first time I had seen a proper show, apart from TV and radio. I enjoyed it more for the experience. It was special, like going to your first football match.”

THE WORST JOB I’VE EVER HAD: “I used to work in a butcher’s shop to get my pocket money. It wasn’t very pleasant.” 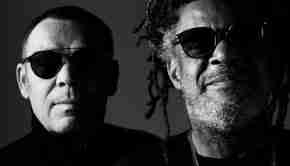