One of the best-kept secrets this fall has been the release of “Time Capsule: The Best of Matthew Sweet, 1990-2000.”

Music writers for newspapers, magazines and Web sites all over the country didn’t know it was coming out Sept. 26; many never received it and, quite frankly, if it’s not listed in ICE Magazine, the mother of all CD release schedules, it doesn’t exist.

Fans can thank Volcano Records for the indifference. It certainly wasn’t Sweet’s fault.

“They don’t care,” Sweet said recently of the Zomba-distributed label. “Nothing matters except radio. They don’t think TV matters. Literally, we’re invited on Conan O’Brien, and all these shows, and they won’t pay for us to go do it. We can’t afford to go be on national TV, and they don’t give a shit enough to pay for it, and that shows their philosophy.”

Sweet is just thankful he has fulfilled his final contractual obligation to the label previously known as Zoo Entertainment.

He likes the sweet taste of freedom.

“I’m in self-imposed limbo right now,” he said, “but I do have to figure out what I’m going to do, if I’m going to pursue a traditional deal or do something myself. We haven’t advertised it at all; we have a couple of places where we know they’d be interested to talk when we’re ready. There were a few people when we were trying to get out of the Volcano deal before the last record (1999’s ‘In Reverse’). But we haven’t called anybody or approached anybody about it or spread the word. My guess is that most people don’t know.

“I’m trying to write some songs first and be able to go to people and say, ‘This is what I want to do.’ It’s fun and scary at the same time. It’s really good for my feeling about working at home, writing and getting into myself; I feel free. I just don’t have to care about anything, like I’ve gotten into playing drums by myself on my demos really badly and doing all this renegade stuff. That’s the mind set I’m getting into.”

For “Time Capsule,” Sweet didn’t scrimp. He painstakingly pieced together the tracks he felt best exemplified his brand of wistful, melancholic power-pop.

“We were a little worried; we knew there were some favorites of people, especially off ‘Girlfriend,’ that we were probably going to leave out,” he said. “For instance, so many people have brought up ‘Come to California,’ and I like it. I didn’t understand that the world knew it very well. It goes real well live; we still play it, because it’s kind of a rave-up. We agonized over whether to put it on. Here’s what the problem was: We left off these songs that we thought were big songs live but weren’t necessarily serious kinds of songs, a little more flippant and just kind of not important. We really tried to fill the record with songs that were meaningful, real and serious.

“We wish we could do a more in-depth couple of volumes, but we knew this was my last contractual obligation. They didn’t want to make a double CD, and so we just tried to make it good and compact. I’m trying to figure what rights I have to demos of mine so I can put them out myself, because there’s so much music I’ve done that never got made into records … like three songs for every one that got on a record.”

A stickler for detail, Sweet even made sure that “Time Capsule” came full circle from “Girlfriend,” his 1991 breakthrough modern-rock LP. A pre-“Dobie Gillis” photo of actress Tuesday Weld graced the cover of “Girlfriend.” Nine years later, she appears on the front and back sleeves of “Time Capsule.”

“I actually talked to her,” Sweet said proudly. “I came home, my manager was trying to get rights for this new photo, to get her to sign off on it, and I came home one day and I had a message from her on my machine! This is crazy! And so I called her back, and she was great, we got along really good, but she did accuse me of being weird. She said, ‘You’re weird, aren’t you? You like those young girls.’

“God, I didn’t think of it that way, I just thought it was cool. It was really intimate, sort of like you’re hanging out with the girl. I like how she’s sprawled on the cement on the back (cover). Those photos went together really well. I thought since it was a 10-year compilation, it was fitting to kind of reprise her role on it.

“In the end, she was happy to give me support to do it, and in fact she kind of went to bat for me in the final moments, when the legal department at Jive was trying to make it really hard to use the photo, and she eventually signed something where she vouched that it was really an old man from the studio that took the photos and he was certainly long-dead.”

Not only does “Time Capsule” serve as a great primer for those unfamiliar with Sweet’s underrated past, two new tracks – the first single, “So Far,” and “Ready” – prove the 36-year-old Lincoln, Neb., native is still very much a viable artist.

Sadly, despite rave reviews, “So Far” won’t get a fair shake at pop radio.

“The people at Volcano said, ‘Well, give us a couple of good radio tracks, and we are going to go out and we’ll promote this record, if you’ll help us,’ ” Sweet said. “So I gamely tried really hard to give them really good tracks for that, and we think that what happened is they got that, and they were kind of shocked that they were as radio-ready as they were.

“They kind of went through the motions; they made a radio pro, and the first thing I heard was there were some stations that hadn’t even played anything from ‘In Reverse,’ for instance, and they said, ‘Yeah, we’d love to play this; we love it; we’ll play it all fall if you’ll come and do some December or Christmas show for us or something.’ And then the label wouldn’t pay for me to go do the radio show. That showed us, well, they’re probably not going to put a lot of money into working the single, and in fact they’ve kind of never done anything with it.”

Customer reviews on Amazon.com have been effusive, lauding Sweet’s prolificacy and devotion to timeless melodies, harmonies and literate lyrics.

One diehard from Larsen, Wis., seemingly speaking for all Sweet fans, said: “Why Matthew Sweet hasn’t consistently had hit records remains one of the mysteries in modern music. … This best-of collection follows his excellent ‘Pet Sounds’ for the ’90s, ‘In Reverse.’ And although fans will quibble over the track selection, this is a solid set. Those who are fans of Big Star, the Raspberries, Badfinger, Beatles, Beach Boys will love this CD. Not a bad song in the bunch. Listen to this over and over, then go out and buy his other CDs.”

“I can never really feel like that,” he said, “because then I would have to believe all that stuff, which I really don’t. I try; I want to be good. The people I idolized are people like Brian Wilson, John Lennon and Paul McCartney.

“Sometimes I feel like so many people say that, god, maybe I should’ve had more radio exposure or something. It does seem strange, and sometimes I wish that I had had label situations where they had really, really gone to bat for something. It never seemed to last very long. Although I can’t really trash anyone, especially the early years of Zoo; everybody was like a family. They worked really hard for me.

“Times change, and it becomes more difficult, especially right now, for artists like me. On a certain level, I guess it doesn’t surprise me that much that I’m not suddenly having huge commercial success when no one else remotely like me is either. It’s frustrating, but it sure does give me hope when people say all those nice things about me. That’s all I can say.”

THE FIRST RECORD I EVER BOUGHT: “Electric Light Orchestra’s ‘New World Record,’ when I was in the fifth or sixth grade. I also had the green vinyl 45 of ‘Telephone Line.’ I thought they were very cool sounding. A bit of Lennon trivia for you, apparently he really loved ELO and said they went well with the Beatles.”

THE FIRST CONCERT I EVER WENT TO: “Interestingly enough, I went to see ELO play, with all the green lasers, in Omaha. I went with my brother and his girlfriend and my girlfriend. The place was so thick with pot smoke, I was practically developing asthma right then and there. I was breathing through my sweater. I ended up making out with my girlfriend in the back seat of the car all the way back home. A great night all around.”

THE LAST CD I BOUGHT: “I got the reissues of John Lennon’s ‘Walls and Bridges’ and ‘Imagine’ while I was at the Rock and Roll Hall of Fame. I had driven out there to play at the opening of the Lennon exhibit and it made me want to expand my Lennon collection. Lennon’s really my inspiration right now. I’m getting back to what’s good and what’s real and honest about music.” 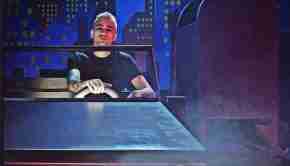