A horror mockumentary called “The Blair Witch Project” is scaring fright fans into a frenzy. Keyboardist Doug Corella and his Verve Pipe band mates have had their own version of psychological terror.

Group members didn’t know quite what they were getting themselves into last summer when they entered The Hit Factory in New York.

“Michael literally had this tent set up in the control room,” Corella said recently. “If you go down to the control room, it’s dark. The only thing that’s lit up is the console itself. He has this thick, black canvas tent totally encompassing the room with poles holding it up and everything. It’s really regimented and kinda spooky.

“There’s a copper-wire cage down there as well, like a torture chamber in a way, because (guitarist) A.J. (Dunning) would have to sit in this cage because of so many RF (radio frequency) signals coming through from the city. A.J. would play his guitar parts in this cage.

“It was a real trip to go into that room, because if you’re in there for 12 hours a day, you come out thinking, ‘Where the hell have I been?’ Michael’s quite the disciplinarian. Once he has a vision of a sound, he’ll be on it, it could be a week or two weeks. He doesn’t let up.”

Though the experience was probably more than they bargained for, it was exactly what they needed, Corella said. They wanted to stir things up, rather than become stagnant.

“It was such an important record for us that nothing ever stopped us,” he said. “We knew we had to get it done, no matter what kind of thing we were going to go through. We kept the doors shut as much as we could to keep out all the distractions. It was really worth it in the end. We have great management, too, which really helps. They keep us all in good spirits as well.”

The group – Corella, Dunning, singer-guitarist Brian Vander Ark, drummer Donny Brown and bassist Brad Vander Ark – wanted someone unconventional behind the boards, the opposite of Jerry Harrison, who produced the group’s platinum-selling debut album “Villains” in 1996.

“To tell you the truth, with ‘Villains,’ there was a lot that we as individuals and as a band didn’t dive into deeply,” Corella said. “There was more to be said on that record, and we didn’t get a chance to do that with Jerry, because that was his thing. He was into less harmonies, that was his call. He was into light keyboard parts so the guitars could stand out as big as they were.

“But I feel like we’ve had the capability to write the kinds of songs that you hear on this record for a long time, we just haven’t found the right producer that could really put it out with us. Michael really relieved a lot of anxiety that we had.

“The angles that he would take, especially what he did with the Marilyn Manson record, were really interesting to us and it was exciting to know there was a guy who liked to take chances. We really wanted to bring new life into our sound, a new approach for things, and bring it into ’99, like using loops, which we had never done before. Still, the bottom line is, we’re still in love with artists like Elton John, Elvis Costello and the Beatles.”

That’s apparent on such effective tracks as “Hero” (the first single), “Supergig,” “She Loves Everybody” and “In Between.”

“For a long time, we’ve been telling people we’re huge XTC fans and Beatles fans,” Corella said, “and then we’ll put out a song like ‘Villains,’ and people are like, ‘Yeah, sure you are, you little grungies.’ We’re more of a pop band than any kind of grunge band. The only reason that one’s still around with us is because of Jerry Harrison. When grunge was out, there was a certain way of recording guitars, a certain way of recording drums. Jerry was into that, so often you hear those same kinds of textures, so people say, ‘You’re kind of a grunge band.’

“Honestly, we have elements of a lot of different things, especially on the new record. I guess it’s hard for people to label us now. And with this record, you get a real sense of the connection we all have in the band, as people, as writers and as performers.”

BWF (before we forget): Get a buzz off The Verve Pipe on the Web @ http://thevervepipe.com. 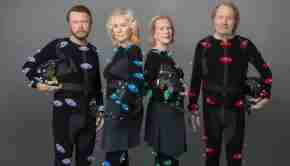