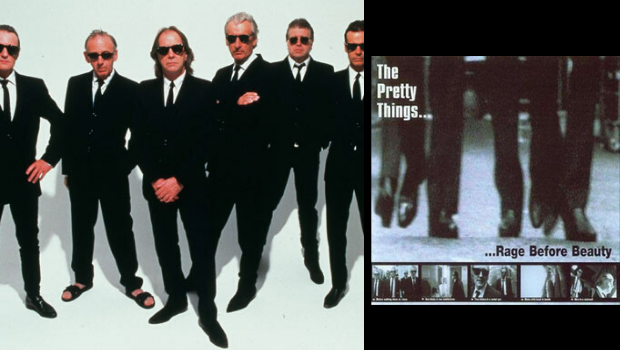 Last month, with legendary British rock group The Pretty Things on its mind, VH1 asked the musical question, “Where Are They Now?”

Right now, at least for one day, guitarist and co-founder Dick Taylor is in a suburban New Jersey hotel room nursing a nasty cold and wondering what the fuss over Hurricane Floyd is all about.

But clearly he is gratified with the glowing reception the infamous garage rockers have received in their first U.S. tour since 1975. The monthlong tour, in support of their Snapper Music album “Rage Before Beauty,” ended Sept. 22 in Philadelphia.

“The warmth everywhere has been extraordinary. You couldn’t want for more,” Taylor said recently. “What’s great is that we’re getting a good spread of generations in the audience. I think it was in Cleveland or Detroit, one guy came up to me and said, ‘I’ve listened to you since 1966.’ Then some other guy, he was like 18 or 19, said, ‘I’ve been a fan of yours for eight months.’ That sums it up, really.

“Of course, you get a lot of diehard people. One guy flew from Florida to see us play at Maxwell’s (Sept. 17 in Hoboken, N.J.). You get people like that, then you also get the younger lot, too, who are just as enthusiastic. You meet people who have every record we ever made, every record cover, blah, blah, blah. It’s incredible.”

Why such devotion for a band that never had a hit song in the United States and had only two Billboard chart albums (1975’s “Silk Torpedo” and 1976’s “Savage Eye”)?

Let history speak for itself: Taylor was a member of the pre-Rolling Stones band Little Boy Blue & the Blue Boys with Keith Richards and Mick Jagger; he formed the long-haired and wild Pretty Things in 1963 with singer Phil May, guitarist Brian Pendleton, bassist John Stax and drummer Viv Prince. An appearance on the British hit show “Ready Steady Go” turned them into an overnight sensation and resulted in several U.K. hits, such as “Rosalyn,” “Don’t Bring Me Down” and “Honey I Need.”

In step with the times, The Pretty Things shifted from its R&B-inspired origins to psychedelia in the late 1960s. Their 1968 album, “SF Sorrow,” is widely regarded as the first rock opera, and the 1970 follow-up, “Parachute,” was voted Album of the Year by Rolling Stone magazine.

Commercial success eluded them in the states, but that only fueled their underground following.

“In ’64, I think, someone in Florida rerecorded ‘Don’t Bring Me Down’ with bleeps instead of a couple of words,” Taylor said, “because Phil had the audacity to sing ‘I laid her on the ground.’ It literally meant ‘laid her on the ground,’ it’s what it means. Someone had the smart idea to put the bleeps on the record rather than the words.

“Of course, the garage bands in the Detroit area picked up on this hugely. We didn’t know it at the time, but we were a big influence on bands like Iggy & the Stooges and MC5. There seemed to be people who just picked up on us. It was more than a word-of-mouth, cultist thing. It’s good for us now, in a way, because it gives us more cache. Everyone’s already heard all the big bands and the hits, so they have to seek us out.

“We then had this psychedelic bit. Again, there were certain radio stations that picked up on ‘SF Sorrow,’ our rock opera album. People were playing it before (The Who’s) ‘Tommy.’ Then that got released by Tamla and that kind of buried it. It was released by EMI in England and obviously coming into America by import. Tamla did their Rare Earth label and released it and just didn’t know how to promote it. It was a very odd situation. That finished off ‘SF Sorrow’ in the states. Then ‘Parachute’ got Album of the Year in Rolling Stone, and that was it. No hit. We were thinking, ‘What’s the deal?’ “

Though Taylor left the band in 1971, the group’s popularity never faltered. One fan, David Bowie, covered “Rosalyn” and “Don’t Bring Me Down” for his “Bowie Pin Ups” album in 1973.

The Pretty Things broke up, reunited and changed lineups several times over the next two decades, then won a legal battle with EMI over control of their masters in 1993. Since then, with Taylor and May leading the way, they released “Rage Before Beauty,” and an EP of two new songs, “All Light Up” and “Pretty Beat,” was released Sept. 24.

Though some may be wary of middle-aged rockers, the 56-year-old Taylor says he can’t imagine doing anything else.

“That’s what’s great about ‘Rage,’ ” he said, “when people say, ‘It’s really fresh,’ and the compliment I really like is when they say it sounds like we’ve paid attention to all the phases of our career. People picked up on that before we did. We thought we were just making a record. People say there’s flashes of everything in there.”

The Pretties, as caustic and driven as ever, plan to stick around a while longer, Taylor says.

“It sounds odd that we’ve been doing this off and on for like 35 years, but I always say if you’re a doctor, you don’t say ‘Hang on, I’ve got to stop doing this now. I’m too old,’ ” he said. “People expect you to hang up your rock ‘n’ roll shoes before you hit 50. What we’re doing, this is a miracle of survival. Most people are happily working up till they’re 65 or whatever. My father-in-law is 83 and he’s incredibly vigorous and still working, so hopefully there’s another few years in us yet.”

THE FIRST RECORD I EVER BOUGHT: “My sister and I used to buy records together, and I’m pretty sure our first one was Elvis Presley’s ‘Mystery Train.’ “

THE FIRST CONCERT I EVER WENT TO: “Mick (Jagger) and I went to see Buddy Holly in 1957. Of course, our favorite record at the time was ‘Not Fade Away,’ and seeing him do it in person was a revelation. And it’s funny how seven years later ‘Not Fade Away’ was the first big hit for the Stones.”