Not many rock bands can say they have been with the same major record company for nine years, but there they are – the Flaming Lips – part of the old guard at Warner Brothers.

“The reason we’ve lasted this long is whenever there’s bad news, we run and hide,” Coyne said recently, laughing. “They say, ‘Well, when the Lips come back from lunch, we’ll fire them,’ and we never come back. We stay out of the crossfire.”

It works both ways, Coyne says; Warner lets them be, lets them go off on their cosmic, trippy, often silly little rock excursions.

“I try to make people realize that they’re (Warner Bros.) not ‘the man,’ ” Coyne said. “I understand they are the ones giving me money, but the limitations they put on what I can do are so invisible that I don’t feel limited at all. I’ve done this for a long time, so I don’t feel like they need to worry if they give me a lot of money what am I going to do with it or something.

“A lot of friends I have, they still feel that way: ‘I don’t want to work for ‘the man.’ If the man gives you a lot of money, sometimes money gives you freedom that your self-imposed poverty never gives you.”

The Lips haven’t exactly registered high on the musical Richter scale. In fact, Warners’ longstanding faith in Coyne and his band mates – guitarist Ron Jones, bassist Michael Ivins and drummer Steven Drozd – didn’t pay off until late 1994 when their loopy pop gem, “She Don’t Use Jelly,” became a MTV Buzz Bin hit and cracked Billboard’s Hot 100 (peaking at No. 55) nearly two years after the album it came from (“Transmissions From the Satellite Heart”) was released.

Before they knew it, the boys once called “the Beatles drunk on Robitussin” by Rolling Stone magazine were playing Lollapalooza and appearing on “Late Night With David Letterman” and, if that weren’t surreal enough, they were called upon to play The Peach Pit in an episode of “Beverly Hills 90210.”

Sure, they had a hit, Coyne says, but they were no fools.

“Alanis Morissette sold 26 million records worldwide (of ‘Jagged Little Pill’) and her new record (‘Supposed Former Infatuation Junkie’) is a disappointment because it only sold 11 million,” Coyne said. “The Flaming Lips selling 350,000 records is hardly considered anything to what is probably the largest company in the world, Time-Warner, and all the things they encompass. I’m not sure they’re real impressed by what we consider to be a real hit.

“But they haven’t killed us yet, and they still give us a lot of money to do what seems to be hopelessly unmainstream art.”

It may be unmainstream, but the Lips’ latest album, “The Soft Bulletin” (released June 22), has an alluring melancholy (“Race For the Prize”) and inane charm (“Buggin’ “) that shouldn’t be overlooked.

Gone is noise for the sake of noise, Coyne says.

“There are obvious things people can do to make a clatter,” he said. “That doesn’t necessarily take any real skill. Volume is an easy thing to do, and abrasive sounds are easy to come by. It’s easy to get someone’s attention in those ways. Sometimes I think it gets dismissed just as easily; ‘Oh, well, if you’re gonna make that much racket, I’m gonna shut it off.’ It doesn’t have a lot of impact after a while.

“Sometimes we would find ourselves doing things we thought were interesting but they amounted more to a clatter than it did any kind of real expression. It wasn’t that we didn’t want to be abrasive; it’s just that we never shied away from that. Some things that we love in music are big and noisy things, but some of the other things we like are quiet, emotional and subtle. There’s a huge range of things music can do, so we never excluded any element of it. Some people will exclude things that are dissident, noisy, and people don’t want to be overly bombastic or dramatic. We never excluded that, so people wrongly think we love making a bunch of noise. It’s not that we love making noise, it’s that we don’t stop at that. An artist like Sade, for example, might like noise, but she’s not going to pursue making that much noise.

“When we started to do ‘The Soft Bulletin,’ we had kind of gotten to the point where we were a little bit tired of that as well, doing these obvious things that felt like ‘That’s just interrupting all this other stuff that we were doing.’ It was a natural evolution away from the obvious noisy stuff to what we think is more dramatic but still listenable stuff.”

That’s not to say the Lips won’t be burning down the house every now and then this summer on their tour with Robyn Hitchcock, Sebodah and others.

Coyne has dubbed the road show The M.A.B.D. Review, or Music Against Brain Degeneration.

“I like these sloganesque tours that are proclaiming to help the world in some way but you really know it’s some title they’re giving another rock tour,” he said. “I wanted to come up with something that really is what we’re about. We really want to present music that’s enlightens you in a way that makes you like music more when you leave the room, as opposed to hoping you never hear music again.

“I’ve been to plenty of Lollapaloozas and European festivals, these things that last all day. I don’t know why the idea of Woodstock appeals to so many people; personally, I hate it. I love seeing bands play, but the idea of being in a stadium or a field for 12 hours is brutal. It presumes you don’t have a life; it says you don’t have a job, you have nothing to do but sit in a field all day and see bands.

“More than a couple of hours of rock ‘n’ roll and I’m bored. What we’re trying to do is present the show in a short, couple-of-hours scenario where you see all these bands play. All these bands are unique within themselves; they offer a big variety of different sounds and different ways of making music, but it’s all done in a few hours, rather than eight.” 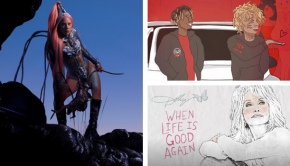