Don’t get Tom Scholz wrong. He’s very proud of the music he has created with his band, Boston, but he’s obviously a man who isn’t stuck in the ’70s.

With “Corporate America” (released Nov. 5 on Artemis), only Boston’s fifth album in 26 years, Scholz is looking to the present and future.

To start a buzz about the album, Scholz posted the biting title track onMP3.com, using the pseudonym Downer’s Revenge to avoid possible preconceptions about anything related to Boston.

Much to his surprise, the song – an indictment of big-company greed – spent a few weeks atop MP3’s progressive-rock chart. It exceeded his expectations (he would’ve been happy if it had charted anywhere, period), but more importantly, he’s ecstatic that the song is reaching college-age listeners.

“My biggest goal was to get that song onto college campuses,” Scholz said recently, “and I knew that it had to be through the Internet. Students have high-speed Internet; they don’t buy CDs. They download music and listen to the Internet. They’re not part of the traditional record-company thing anymore.

” ‘Corporate America’ is the kind of song that anyone who has any interest in this issue or has thought about it will latch onto it.”

Boston’s first protest song is timely, coming on the heels of the Enron and WorldCom scandals, but Scholz – the group’s founder-guitarist-songwriter-producer – says it took him four and a half years to finish it.

“It was written about much more serious problems that corporate America creates,” he said. “It sounds odd to say that wiping out thousands of people’s life savings and retirement money was not that serious, but compared to some of the other things that big business has done – like toxic waste dumps, disappearing rain forests, ozone holes – it’s a walk in the park.

“I thought at least I’m going to put this into a song somehow and I’m going to make it as powerful as I can. It’s a very tough assignment for me, because I haven’t done anything like that before. It really took me the entire four and a half years when I started working on this CD. I was working on version after version of ‘Corporate America,’ trying to find the lyrics that would get my point across and find the music that would convey the emotion. It was quite a struggle … by far the most time I’ve put into a recording.”

Scholz gets it off his chest in “Corporate America”: “Who can stop de-evolution of the human race?/ Look at you, Corporate America, you’re in disgrace/ Globalize; cigarettes, business jets, you love it/ Maximize; but you can take your bottom line and shove it.”

His disdain for big business, he says, came through a slow realization over many years in trying to figure out what’s at the root of the world’s problems. He touches on that and his own experience with big business in his one-on-one with Pause & Play:

P&P – Was there anything in particular that set you off to write the song?

Scholz – “Yes, I saw a documentary which really kind of frightened me. For the first time in this country, even though there have been big corporations for quite some time, corporations today own the media. They can say no to a story going out on national news or local news, anywhere. When I saw that, I went, ‘Oh, my God, freedom of speech doesn’t mean a damn thing if the oligopoly has a complete stranglehold on the media.’

“I thought it’s time for me to attempt to bring some public attention to this. Before Enron, CEOs were regarded as some kind of damn rock star. They were idolized. That’s so wrong. I’ve met plenty of them, and in my opinion, they are the scum of the Earth.

“We seem to be in this death spiral, as far as destroying this planet and its inhabitants. We have all the technology; we have enormous wealth and enormous knowledge. People really don’t want to ruin this planet, so why do we have gas-guzzling SUVs? Why do we have ozone holes and global warming and people using incredible amounts of power on a daily basis in this huge glut of consumption?

“I wondered, ‘Is it the people?’ Of course, it’s human nature, but on the other hand, people are smart enough to respond when they understand a threat. I realized it really stems from this handful of people in an elite club – high-level executives of giant companies. It finally dawned on me, ‘They elect our government. They decide who is going to be in and who is going to be out.’ They can change public opinion and create public opinion. They can create fashion, for God’s sake. They do basically anything they want.”

Scholz – “It’s no question that they put us in a position to be a target. There’s no question they have a huge responsibility for what has turned into a nightmare in the Middle East. It started with them trying to take advantage of oil reserves and turning it into money and power for themselves. They weren’t looking out for you and me, trying to get us gas to go to work. It’s pure profit and power-motivated.

“It’s not the money. Money is just a measure of how they’re doing. They’re just playing this game. I don’t think the average person realizes that they’re playing this game with us. To them, they don’t need another $100 million. It’s the AT&T guys trying to outdo the GM guys. It’s this ridiculous game, and we are pawns in it.”

P&P – Does the title track’s political nature fit in well with the rest of the album?

Scholz – “Well, ‘Turn It Off’ is also a strong social commentary song. There are two kinds of songs on this album: songs about survival and the others are about surviving love. As far as I’m concerned, those are the two most important things you have to deal with on Earth.”

P&P – When I first heard that your album was going to be called “Corporate America,” I thought, ‘Sounds like he’s commenting on his own experience with corporations,’ namely your lawsuit with Epic.

Scholz – “Yeah, I’m sure a lot of people thought that. What happened to me, of course, is a tiny, minor flea bite compared to what’s going on out there. No doubt, I’ve had my own tangles with corporate America; I’ve always been too rebellious for my own good.”

Scholz – “This guy (at Epic) wanted me to churn out a record when all there was, was two songs and a lot of junk. When it became apparent that I wasn’t going to do that, I think that kind of got his goat.

“A lot of people were shocked that I was able to prevail in that CBS suit. They’re a billion-dollar company, for God’s sake. I hadn’t gotten most of the money owed me, so I didn’t have a war chest to fall back on for lawyers and all that. There were all sorts of opportunistic people lining up to finish me off. I have a lot of enemies today because I won.”

P&P – The suit set a legal precedent, and now labels are more careful with contracts. Do artists appreciate what you went through?

Scholz – “They know what I had to go through in order to succeed and that I actually completed an album (1986’s ‘Third Stage’) while it was going on. That was actually my favorite part of it. These (label) guys didn’t know – they’re so removed, and they’re don’t know or care where this music comes from.

“They apparently thought that they could stop me by choking off what little income stream I had and somehow that would keep me from going into the studio. What they didn’t realize was that I had made all these records in my basement pretty much by myself.

“After all this time and after I don’t know how many albums were sold, like 20 million later, they apparently had no idea that these were just me working in my basement studio. I guess they thought I had to have huge advances to go into a big production studio with crews and musicians. I found that to be the most ironic thing of all.”

Scholz – “Irving Azoff (then the head of MCA) took a huge chance on me, doing that. He did a great job promoting that album, and it did really well.”

P&P – Are you following the current movement, led by Sheryl Crow and Don Henley, for artists’ rights?

Scholz – “I don’t know the exact details, but it really would be a great idea if there was something formally put into law. It’s easier now to win those kinds of cases, but (artists) still go broke trying to defend themselves because these big corporations don’t notice a $5 million legal bill. That’s not a darn thing out of a billion-dollar budget.

“You really can’t defend yourself because the U.S. legal system created such a huge financial burden for the accused. It’s very unfair. Theoretically, you can recover attorneys fees, but realistically, they don’t award those very often unless it’s a really clear-cut case. So, pretty much if one of these companies takes aim at you, you’re going to lose, whether you win or lose the case.

P&P – I just have to know, though: Did you know what you were signing when you hooked up with Epic in 1976?

Scholz – “I wasn’t a lawyer, and my legal advice came from a real-estate attorney, and it was apparent that there was no one else who had my interest at stake. They were clearly out for themselves.

“Historically, it’s almost accepted fact that people in artistic fields are not only bad at the business end, they really don’t want to be good at it. We are sitting ducks for those who are not particularly talented and love the idea of taking advantage of somebody else’s work. That’s a bad situation that will always exist.”

Scholz – “She’s incredibly talented. She’s the sweetest, most normal person I’ve ever had. (Guitarist) Gary (Pihl) and I were out looking for drummers, and we were checking out this band at a local place that was here from Nashville. He had this gorgeous blond singing backup and guitar; she didn’t hit a bad note all night and really stole the show. Afterward, we went up and talked to her. She had no attitude, a breath of fresh air. We told her we had enough guitar players in the band, but if she wanted to join and play bass, she could do that. A few weeks later, she contacted me. She said, ‘I bought a bass at a hoc shop, I have a CD and I’m learning the songs. I’d like an audition.’ She’s an awesome songwriter. If we had found her a little sooner, I’m sure she would’ve had another song or two on this, in addition to the one she did.

“Anthony contributes three songs on the album, including ‘Turn It Off.’ He’s very talented. You know, it’s great to find people who can make such a large contribution to what I’m doing.”

THE FIRST RECORD I EVER BOUGHT: “I didn’t buy records; I just borrowed them and didn’t return them. I do remember that I used to listen to the very original Iron Butterfly album, not ‘In-a-Gadda-Da-Vida.’ I also really liked Blue Cheer; if anybody heard that today they would realize that there’s nothing new heavy-metal rock today.”

THE FIRST CONCERT I EVER WENT TO: “I think it was Led Zeppelin. It was a lot of fun.”

THE WORST JOB I’VE EVER HAD: “I used to weed petunias for a landscaper. That’s when I knew I had to go to college and develop a career.” 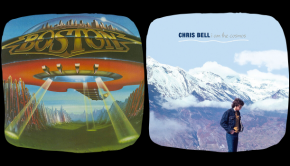