Scratch the British rock ‘n’ soul group Roachford off the list of “the greatest disappearing acts of the 1980s.”

To American audiophiles, it may seem that the quartet, which reached No. 25 on Billboard’s pop chart with the vibrant “Cuddly Toy (Feel For Me)” in the spring of 1989, was just another flash in the pan, the proverbial “flavor of the month” from England.

“We got caught up in politics, in a way,” the South Londoner said recently. “Our record company didn’t release our second album in America. So it looks like we vanished for like five years, which seems very strange.”

The band’s third album, “Permanent Shade of Blue” (on Epic), was issued earlier this year in England and certified gold. Powered by the pop-pumped single “Only To Be With You,” the LP also has gone double-platinum in Australia and sold more than 100,000 copies in Germany.

“The ironic thing is, I think our music would appeal to a lot of Americans, but it’s just a matter of getting them to hear it,” said Roachford, who is buoyed by the recent U.S. success of other black British artists such as Seal and Des’ree.

“Things have changed. They’re being accepted in America. When I first went over to America, it was a different world. It was all new for us.”

Six years ago, Roachford told Rolling Stone magazine that his major inspirations were the classic soul and blues sounds of the ’50s and ’60s. “Otis Redding lives in me,” he declared.

Today, “Otis lives in me more now,” Roachford said, with a laugh. “I’m not saying his spirit is possessing me. I feel an affinity with what he was feeling, where he was coming from, the depth and the soul that he had. I think I have some of that feel myself.

“I just love the kind of artists who can get up there and just pull everything out, the rawness out. So many singers today are preoccupied with their egos. They’re not giving everything of themselves, really. They’re just giving you the version of them that they think is cool.

“Otis Redding wasn’t about being cool. He was just real.”

With that in mind, Roachford says he is optimistic about his band’s stateside chances.

“Our time will come. We have a lot of influences from America and that’s one reason why it’s so important for us to be accepted in America, because it’s an acceptance I think we deserve.”

BWF (before we forget): Roachford briefly charted in Britain in October 1997 with the single “The Way I Feel.” 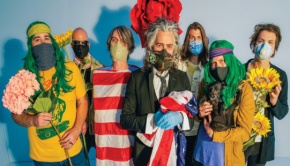