It’s not often a record company signs a band that already has a rabidly loyal fan base in place.

That’s exactly what Lava Records got when it landed Porcupine Tree, the intellectual-rock quartet from England. Its brilliant label debut, “In Absentia” (released Sept. 24), exposure on MuchMusicUSA and MTV2 with the video for the single “Strip the Soul” and an upcoming tour opening for Yes should take the band from the underground to the mainstream.

“We’ve always had a strong word-of-mouth following and a very strong presence on the Internet,” singer-guitarist-producer Steven Wilson said recently. “We have like 25 or 30 fan-oriented Web sites out there now. We’re starting to pick up radio airplay and making videos for tracks off the record. We’re getting support from all sides of the industry.”

The last thing Wilson and band mates Richard Barbieri (keyboards), Colin Edwin (bass) and Gavin Harrison (drums) wanted to do, though, was alienate its original followers along the way.

“The worst thing we could do is give the impression to our fan base that we’re now going off to something big and turning our backs on them, which is not the case at all,” Wilson said. “In fact, if anything, this new record is a return to possibly more experimental territory for us after the last couple of records and we’re taking (our fans) with us rather than turning our backs on them.”

Porcupine Tree, a cross between the art rock of King Crimson and the modern rock of Radiohead, surprisingly had little trouble in attracting big-label attention when it returned to America last year for a tour. Label reps turned out in force.

Wilson says the music industry, looking for fresh new faces, may have finally caught up with Porcupine Tree.

“The whole musical climate had changed since we started coming out to America (in the mid-1990s),” he said. “With the success of bands like Radiohead and Tool, the record labels had kind of come around to the idea that it was possible to have a fairly willful, uncommercial band that could still cross over to a big mainstream audience and not necessarily compromise what they did.

“We were kind of in a position where we could choose where we wanted to go, which is kind of ironic after all these years. We definitely went with the label that got it and was prepared to let us do our thing, build on what we already had and give us more marketing and financial clout, which we always said we lacked.”

One listen to sonically expansive tracks such as “Blackest Eyes” confirms that Lava got its money’s worth.

“It has strong melodies. It makes you want to listen from the beginning to the end, because it has a flow and a sequence to it. That’s always been my goal, to bring back the idea of the album as an album, rather than just a set of 10 pop songs thrown together. There are people out there who appreciate that.”

Yes lead singer Jon Anderson is one of those who appreciates Porcupine Tree, who will open for the prog-rock veterans in nine U.S. cities.

“They’re doing exactly the right thing, the right songs and the right style,” Anderson said recently. “You know, there’s a bunch of these bands around and, to me, they’re the next wave of modern music. It’s a combination of King Crimson meets Yes meets Zeppelin meets grunge and Radiohead. It’s nice to have one of them touring with us.” 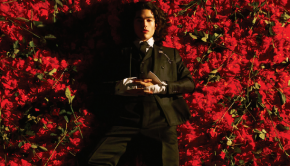