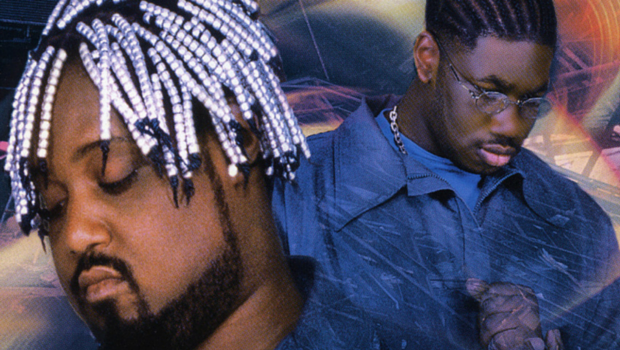 P.M. Dawn has a spiritual awakening

If P.M. Dawn leader Prince Be’s world changed with the arrival of his son, Christian, a few years ago, imagine what happened after his wife gave birth to twins in January.

“Man, you should see the stress on his face,” J.C. said recently from their native Jersey City, N.J., studio. “He’s a happy man, but he’s stressed.”

Prince Be’s not so much overwhelmed by late-night feedings, diaper changes and constant attention as he is with the uncertainty of his children’s future, every child’s future. He addresses those concerns, tempered with shades of hope, on the group’s fourth album, “Dearest Christian, I’m So Very Sorry For Bringing You Here. Love, Dad” (Gee Street/V2), released Oct. 27.

P.M. Dawn has had a fruitful career since its 1990 gold-selling debut LP, “Of the Heart, Of the Soul and Of the Cross: The Utopian Experience.” The album’s centerpiece, “Set Adrift On Memory Bliss,” hit No. 1 on Billboard’s pop chart. Other hits followed over the next four years – “I’d Die Without You,” “Looking Through Patient Eyes,” “Downtown Venus” – and “The Bliss Album …?” also sold more than 500,000 copies in 1993.

They had fame and fortune, but something was missing, Prince Be said.

“Before Christian, I was very self-destructive,” he said. “Children have calmed me down a lot. I try to keep my kids happy as much as possible, because I know their adult life is going to be shit. Once you have to start dealing with reality, it’s fucked up. After you have kids, there isn’t anything worth doing for yourself. Me and Jarrett made a lot of money and we’ve had a lot of success, but it was almost like, ‘What else now?’

“As a parent, you have to wing it, man. It’s the bottom line. But you can’t worry yourself to death about the world around you. When I see my son, I just try to have the best time I can possibly have within those minutes I’m with him. We’re always joking, we’re always laughing. There are lessons to be learned and we deal with it, then after it, we start laughing.”

A big part of Prince Be’s fears stem from his own childhood. His father died of pneumonia when J.C. was just a month old, and a younger brother, Duncan, drowned in a park lake at age 2. Prince Be, born Attrell Cordes, and J.C. (Jarrett), were raised by their mother and her second husband, George Brown, a founding member of Kool & the Gang.

“There are too many things that bother me about how we communicate with each other to not worry about how it might affect my kids,” Prince Be said. “Even with my parents, I had a horrible relationship with them, my mother in particular. I know that when she first saw me that she didn’t start out hating me; it’s like, wow, how do you get from point A to point B? I don’t want to be this horrible parent, but I don’t want to spoil my kids. I’m trying to juggle every possible theory I have about child-rearing.”

“I wanted to use the negative to evoke the positive,” he said. “It seems like a very hopeless record, but there actually is hope on there, I’m just not going to serve it to people on a platter. You have to find it yourself. These are all questions I’m faced with, but I still have hope in some weird-ass way. These are the questions that are on my mind, these are the reasons why I feel like, ‘Wow, was I really thinking when I said ‘Yeah, we should have kids’?’ Was I thinking for myself, was it an ego trip thing or was I really doing some soul some good?”

While Prince Be came to terms lyrically with his situation, he relied heavily on J.C.’s melodic flair for the album’s atmospherics.

“When we had a discussion about doing the album, Be was talking about having it really moody, slightly demonic,” J.C. said. “I was thinking, ‘Oh, shit.’ One of the first songs I heard was (the opening track) ‘Music For Carnivores’ and that sparked it off for the vibe of the album, sonically where it was going. Be went through a lot writing this record; I pretty much had the easy job. He would sing melodies to me and we’d work out parts for the songs and create the vibe.”

The album’s first single, “I Had No Right,” is at No. 44 this week on Billboard’s pop chart. Unlike past P.M. Dawn hits that liberally sampled other artists’ songs (i.e. Spandau Ballet’s “True” on “Set Adrift On Memory Bliss”), “I Had No Right” has its own inspired, heartfelt arrangement. Through the rest of the album, the samplings are so subtle that no obvious classic hooks stand out, making “Dear Christian” a true P.M. Dawn effort.

“Sampling a song is the ultimate tribute. There are only 88 keys on the fucking keyboard, we’re all going to run into notes in songs. Any artist is a bunch of artists they respect rolled up into this new guy. It’s out of respect for each other. I don’t think anyone’s going to sample a Joni Mitchell song and say they do it because they hate her. She’s a big influence on me, in terms of my lyric writing and everything I’ve done as an artist, the same way Prince and Michael Jackson and Sly Stone and Marvin Gaye are. You listen to these people and they consume you as an artist.

“We were going to take off every song that had samples, and that would’ve left about five or six songs on the record. We were going to call the record ‘I Hate This Place.’ If I couldn’t present this record the way I wanted to, then I didn’t want to do it at all. We ended up using a lot of live instrumentation, doing a lot of things differently than we normally do.”

It was a risk worth taking, Prince Be said.

“I’m not checking articles to see what’s been written about the album or seeing if radio’s playing it,” he said. “We’ve been working on this record for so damn long, it’s like, ‘Here it is, if you like it, you like it. If you don’t, I’m real sorry.’ “