Placebo may not have a platinum album or a hit song to its credit in America, but the British neo-glam-rock trio definitely has its foot in the door.

With their third album, “Black Market Music” (released May 8 on Hut/Virgin) and a headlining North American tour with Idlewild, singer-guitarist Brian Molko, bassist-keyboardist Stefan Olsdal and drummer Steve Hewitt may finally get to walk right in.

“It’s coming, slowly but surely, for us,” Olsdal said recently. “This is the seventh time we’ve come over (to the states to tour) in the past six years, so we’ve continually had a presence here.

“This tour is basically selling out all over the place, like the Palace in L.A. It’s the club circuit, and we’re very happy with that. It keeps us hungry, and I also think it’s just another stepping stone for us here in the states. We wanted to make a presence here, and tour at the same time as the album is coming out. It’s one of those things where we’re going to keep coming back.”

Olsdal says “Black Market Music” was a refreshing but difficult change of pace from their sophomore album, 1998’s critically acclaimed “Without You I’m Nothing.”

“This one was the hard one,” he said, “but what we tried to do with the first two albums, we managed to do with this one, both in the sound and the songwriting. Live, six years of touring is going to make you pretty fuckin’ tight. We’re tighter than a vicar’s dirt box, as we say back home. We’re really coming into our own. We’re a stronger, more confident band.

“We definitely wanted to make a rockier album. The second album, in a way, was schizophrenic; it didn’t really know what it wanted to be. We also wanted to take control on the production level, which we didn’t do on the first two albums. We probably would’ve been more happier with the results of the first two albums if we were more in the driver’s seat.”

Placebo stretches rock’s boundaries by collaborating with a diverse group of artists, among them American rapper Justin Warfield (who appeared on Cornershop’s “When I Was Born for the 7th Time”), PJ Harvey drummer-string arranger Rob Ellis and Severe Loren (AKA Caroline Finch), lead singer-guitarist of the British rock quartet Linoleum.

“Black Market Music” also includes a bonus duet with Placebo fan David Bowie on “Without You I’m Nothing.”

“After doing the duet with Bowie, we decided to go more grass-roots with our collaborations,” Olsdal said. “With Justin Warfield, we were working on a track, and we didn’t know which direction it was going in, so we thought, ‘Let’s try rapping,’ because we’ve been fans of Public Enemy for a long time. It came up and we thought Justin would be the one up for it.

“We’ve always been a fan of Rob Ellis’ drumming and string arrangements, and that worked out really well. And Severe Loren, we’ve been on tour with Linoleum a couple of times. We wanted to experiment with a female voice on a couple of tracks.”

Bowie has been well aware of Placebo and Molko’s melodramatic vocals since he came across the band’s demos in early 1996. Impressed by their punk-pop revival, Bowie asked them to open for him on a few European dates before they even recorded their first album.

The Bowie connection didn’t end there: After their self-titled debut (on Caroline) spawned a Top 5 hit in the U.K. with “Nancy Boy,” they were invited by Bowie to perform at his 50th birthday bash at New York’s Madison Square Garden. He joined them onstage for an encore at Irving Plaza in New York in 1999, and they teamed for a version of T. Rex’s “Twentieth Century Boy” at the 1999 Brit Awards.

“He’s got quite good taste in music, don’t you think?” Olsdal said, with a laugh. “We’ve done a couple of tours with him and the duet.”

Olsdal admits he and his band mates often pinched themselves when they were in the studio with Bowie in early 1999 to record a new version of “Without You I’m Nothing.” The song was released as a U.K. limited-edition single in August 1999.

“Yeah, you’re in awe of him for like the first hour and then you continue doing it until he leaves the studio,” Olsdal said, “but he very much puts you at ease. He’s a very sympathetic, likable guy.

“When you’re as a big a star as he is, you have less to prove, I guess. There’s an inner satisfaction. I think it can be quite amusing for people like him after a while to watch people freak out around him because they’re so in awe. He’s somebody we definitely look up to, both as an artist and as a living rock-star legend. He hasn’t changed his approach to music, and he’s still a nice guy. It’s something for us to strive for; I’d be happy if we got halfway to where he’s gotten.”

Will America swallow Placebo? Olsdal says it’s hard to tell, but now’s as good a time as any.

” ‘Spite & Malice,’ the track with Justin Warfield, is probably going to be the first single in the states,” he said. “That’s probably more suited for the American market. But you never know with these things. We don’t see this as the be-all-that-ends-all, whether this is the album or there’s several more albums to come. It’s a very strong album, and we’re definitely going to work it hard here.

“We’ve been touring since July, well before the album was released last October in England. We’ve got the energy to do it. We’ll probably take a break after this whole album cycles around, but it’s a competitive thing for us. There’s a lot of bands out there. If you disappear for too long, you might miss the bus.”

THE FIRST RECORD I EVER BOUGHT: ” ‘Revenge’ by the Eurythmics in ’86. I love pop, and they’ve done some great songs.”

THE FIRST CONCERT I EVER WENT TO: “Neil Young in Luxembourg ’86, where I grew up. I wasn’t a really fan, but bands never came to Luxembourg, because it’s such a shithole. I got dragged along by a friend. I watched Young smash his guitar up and pull out his strings because I guess he got pissed off that the sound was so bad. Luxembourg fans don’t move around, either; they look like they’re all on Valium, so he might have been pissed off about that, too.”

DO WE HAVE YOU, THE BRITISH, TO BLAME FOR GIVING US “POPSTARS”?:“Actually, I think that started in Australia. Besides, it’s not my fault, I’m Swedish (laughing). I’ve rid myself of any blame. I do think, since it’s coming out on video, I might get the first (U.K.) episode because they were going around auditioning people. I guess I enjoy watching people making asses of themselves.” 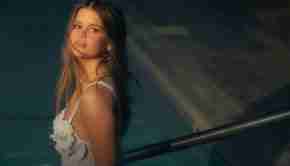