Pete Seeger seemingly has done it all in his 79-year life.

In 1940, he formed the Almanac Singers with Woody Guthrie. He was one-fourth of the Weavers, the most influential and commercially successful folk group of the 1940s and ’50s. He was blacklisted by anti-Communist zealots in the early ’50s and, a decade later, was revered by Vietnam War protesters. He has written many folk standards, including “If I Had a Hammer” (with Lee Hays) and “Where Have All the Flowers Gone,” and carved his name in rock history by adapting the words from the Book of Ecclesiastes to create “Turn! Turn! Turn!,” a No. 1 hit for the Byrds in 1965.

He’s still a crusader for social and political causes, but today he’s reveling in a simpler life on his sprawling farmland along the Hudson River near Beacon, N.Y.

He deserves the rest.

Seeger doesn’t even have to leave the comfort of his living room to get the red-carpet treatment. Appleseed Recordings, through Red House Records, recently released “Where Have All the Flowers Gone: The Songs of Pete Seeger,” a two-CD, all-star salute to the troubadour’s legacy.

“It was a great honor to have these extraordinary performers singing some of the songs I’ve written years and years ago, or helped to write,” Seeger said. “Many of them, as you know, I did not write them all. Some of them I contributed extra verses or a rhythm or melodies to somebody else’s words. I’m better at melodies than I am at words.

“Occasionally, I’ll make up a good verse. I made a good version for Joni Mitchell’s ‘Both Sides Now,’ and I’m not the only one who sings it.”

In a raspy, weathered tone, Seeger sings it earnestly: ” ‘Daughter, daughter, don’t you know, you’re not the first to feel just so, but let me say before I go, it’s worth it anyway. Some day we may all be surprised, we’ll waken up and open our eyes and then we all will realize the whole world feels that way. We’ve all been living upside down and turned around and love unfound, until we turn and face the sun. Yes, all of us, everyone.’ It was a good verse, if I say so myself.”

Two years ago, Seeger was inducted into the Rock and Roll Hall of Fame as an early influence. He admits he’s “amused by the situation” but says rock ‘n’ roll is the real folk music for the late 20th century.

“The term ‘folk music’ is such a widely disagreed upon term,” he said. “I hardly ever use it. Originally, it meant the music of the peasant class, the ancient and the anonymous. The phrase was coined about 150 years ago.

Even when posed a trite but respectful question – like “How would you like to be remembered?” – Seeger answers it with a twinge of humor and humility.

“There’s too damn many things for kids to remember already,” he said, “and I expect to be mercifully forgotten. Maybe my grandchildren will remember absent-minded Grandpa. If you’re a researcher in the field of music, my books and records will be somewhere on the shelf.”

He quantifies that with “… if there’s a human race.”

“Keep in mind that I think there’s only about a 50 percent chance that there’ll be a human race in a hundred to 200 years,” he said. “People think, ‘You’re awful pessimistic,’ but I’m putting an optimistic view on it. I think there’s a chance.

“There’s a lot of people around who think there is not chance, because they simply point to what’s going on. The population is slowing down, but not enough, and there’s irresponsible scientists inventing new ways in which we can wipe ourselves off the map, if it’s not explosives, it’s bacterial warfare or chemical warfare.

“So, a lot of people are pessimistic and not having children for this reason. On the other hand, I think there’s a 50 percent chance, so I count myself as an optimist. And I urge people to have at least one kid, because it’s a very wonderful experience.”

BWF (before we forget): For more on Pete Seeger and the “Where Have All the Flowers Gone” tribute, check out www.appleseedrec.com. 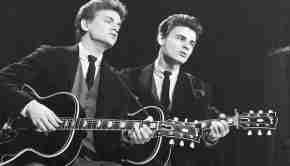