‘Out of Nothing’ Comes Something

The British quintet’s first single, “All You Good People,” was the second most-added song behind Beastie Boys’ “Intergalactic” one week that spring. But before the group could fly to the United States and help promote the anthemic-rock hit and the band’s debut Geffen album, “The Good Will Out,” it fell victim to the dreaded Universal-Seagrams merger.

Embrace’s U.S. window of opportunity was closed before it even had a chance: The band was dropped and the album never saw a U.S. release.

Hope springs eternal in lead singer-guitarist Danny McNamara. He never lost faith. He knew Embrace would get another shot at America … he just didn’t think it would take seven years.

Judging on how “Out of Nothing” fared in Britain and the response Embrace has encountered on its first U.S. gigs, McNamara’s optimism is justified.

“It does feel like sort of a comeback for us,” he said recently, “because we took three years to work on the album. This album has sold more in Britain than the first three albums put together. That’s quite a comeback.

“Then we did a short tour of America about a month and a half ago, and it was all sold out, which we didn’t expect. There were a lot of people there who’ve been wanting to see us since the first canceled tour seven years ago. They know the back catalog; they bought the other albums on import. The crowds have been amazing. We’ve been going down as well as Snow Patrol, the headline act. We weren’t expecting that at all. And the guys in Snow Patrol are really nice, so the whole thing’s been a great dream, really.

Better late than never, particularly for a group that deserved it the first time around. On “Out of Nothing,” Embrace stays on its tried-and-true path, with epic tunes, sweeping choruses and stirring rock ballads. “Ashes” (Hear here via iTunes) is the first single, but there are more waiting in the wings, with “Gravity” – written by Coldplay’s Chris Martin – the best of the whole bunch.

The addition of producer Youth, though, takes Embrace one step beyond. He gives their songs more of an upbeat edge. McNamara admits he initially resisted any tinkering of their songs.

“In three years, we had written over 500 songs, and from that, we had managed to get it down to a shortlist of about 15 that really stood out,” he said. “We realized at that point that we needed someone who’d be more objective about the whole thing and could come in and be a fresh pair of ears. We had worked with Youth before and knew that he was an artist-led producer, not an engineer-producer. He never touched the desk; it was always about songs and arrangements. We were excited about the idea.

“But we didn’t realize that he was going to completely change everything, quite dramatically in some instances. That led to, certainly from me out of all of us, ‘What’s happened to my dream album? Songs I’ve had in my head for so long are sounding completely different. I’m not sure I like where we’re going.’ The songs all sounded generally too fast for me, not gentle enough. I started to realize after about six weeks of following what Youth wanted to do, and me dragging my feet and arguing every step of the way, that the music was actually sounding a lot better than I had in mind, that I should leave my ego and pride at the door and let him do his job, because he’s an unpredictable genius. The album wouldn’t have turned out as well if it weren’t for him. Those creative tensions are a necessary evil if you want to create a good album.”

“Pretty much every song was a live take, with the five of us,” he said. “We did put strings and backing vocals on, but when you come to see us live, the backing vocals are done by the crowd and the strings are samples from our keyboard player. It just sounds more rock ‘n’ roll when we do it live.

“I think we are stronger live. One of the things that fans have always said is that we sound better live than record. But I think for the first time, thanks to Youth, he captured some of that live spirit on our album.”

Some people who don’t know any better might compare Embrace to Coldplay, but it should be the other way around.

“Chris (Martin) has never made any secret that we were a big influence on him and the band,” McNamara said. “I absolutely love ‘Gravity.’ I was really pleased when Chris gave it to us.”

Seven years is an awful long time. McNamara says they never kept their eyes off one of their main goals: to tour America.

“We never really got a shot the first time around,” he said. “Since we got dropped in the Seagrams takeover, it’s been record company politics. We’ve never actually done a gig out here until this year.

“In all that time, those seven long years, we’ve been dying to get out here. You’re not really a band on tour until you’ve been in one of those silver buses and gone across the desert, you know. It’s a romantic thing for a lot of English bands, certainly for us. We just never had a chance to do it. It became sort of a holy grail for us. It’s much more exciting going across America than it is going across Europe.”

Regardless of how “Out of Nothing” does stateside, McNamara says Embrace isn’t resting on its British laurels.

“Certainly, everyone in a band wants to go out on a high, having done something that you’re really proud of,” he said, “and you wonder ‘How can we do any better than that? If we can’t do better, we should stop.’ But we’ve already started work on our next album and it’s already sounding great.

“All I know is, I probably wouldn’t be enjoying this now if it had happened for us back then in ’98. It’s definitely sweeter this time around. The fact that we’ve had a second shot – the first album was successful in Britain – we’re enjoying the ride a bit more, taking it all in and valuing it for what it is. Ironically, that seems to be making us better live, and also the music seems to be getting better, more organic and more inspired. We’re just starting to hit our stride, really.”

THE FIRST RECORD I EVER BOUGHT: ” ‘Tainted Love’ by Soft Cell. That’s not bad, is it? I saw them on ‘Top of the Pops’ and thought it was wonderful, so I went out and got it for like 75p, which is like one and a half dollars.”

THE FIRST CONCERT I EVER WENT TO: “Adam & the Ants, on the ‘Prince Charming’ tour, when I was 10. I had already been into rock ‘n’ roll since I was 6, right when Elvis had died. I saw everything about him on the telly, and I thought, ‘I want to be Elvis.’ “

THE WORST JOB I’VE EVER HAD: “My dad used to build houses. One day, we had to lift about a 9-foot high pile of plaster board up two flights of stairs. It took about eight hours. It was horrible.” 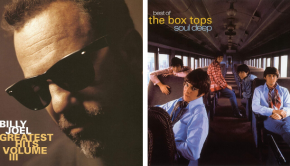