In Britain, grabbing the No. 1 song during Christmas week is a big deal. There are websites, apps and betting odds devoted to it. Score a Christmas No. 1 and you are guaranteed a financial windfall.

Why all the madness?

It really heated up in 1973 when the British, seeking escapism from economic woes and IRA bombings, became obsessed with finding out which Christmas song from the top glam groups of the day, Slade and Wizzard, would come out on top. Slade’s “Merry Xmas Everybody” beat out Wizzard’s “I Wish It Could Be Christmas Everyday,” and it’s been a great race every year ever since.

Superstar groups, novelty songs and charity hits have dominated in the past. According to OfficialCharts.com, contenders this year include:

Friends of Jo Cox, “You Can’t Always Get What You Want”

Steve Aoki & Louis Tomlinson, “Just Hold On” – Tomlinson performed it on the “X Factor” finale just a week after the One Direction member’s 43-year-old mother died of leukemia

Cruz Beckham, “If Everyday Was Christmas” – 11-year-old son of David and Victoria Beckham

Vaults, “One Day I’ll Fly Away”

James Corden, “The Greatest Gift for Christmas Is Me”

Two of these lead our latest batch of New Songs.

“Do You Still Love Me?,” Ryan Adams

“Vengeance On My Mind,” G-Eazy

“Amputation,” The Jesus and Mary Chain

“Back To Me,” Marian Hill

“Next to You,” Tyler Hilton

“Change Me,” Fear of Men

“Governed by Contagions,” At The Drive-In 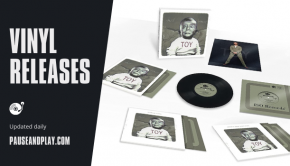