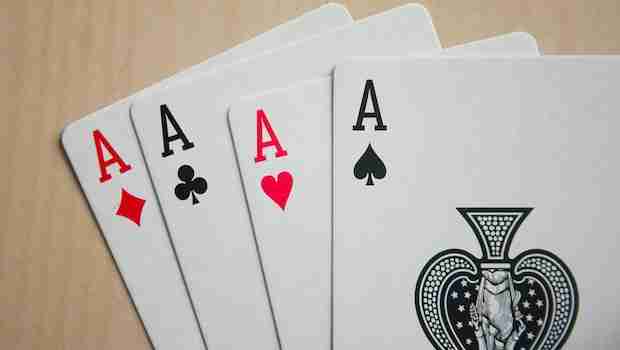 Musicians and Their Card Games

The use of card games in the music industry is widespread and dates back almost as far as the instruments themselves.

Ned Miller’s 1957 classic “From a Jack to a King” is a classic example of an early song drawing inspiration from card games, and there have been plenty since. There are too many to mention them all, but Aerosmith’s “Deuces Are Wild” and Lady Gaga’s “Poker Face” are laden with card references. Since MTV popularized the music video, cards have also been used in the films accompanying some of our favorite songs.

It isn’t hard to spot why card games are used, both literally and as a metaphor. Not only does a card game promote excitement, tension and risk, but it can also be used to describe real life, too. Many use cards as a metaphor for love, including themes of loss, putting yourself out there or “going all-in,” and sometimes coming out on top. Sometimes.

Sometimes, the singers and songwriters behind the great tunes are not just using the games but also drawing on their own experiences. High-profile artists often have a penchant for cards, given their disposable incomes and wanting to chase the highs of being on stage in front of thousands. That’s led to several artists being inextricably linked with certain card games, as you’ll see below.

For a short while, Nelly was perhaps the biggest rap star in the world. Tracks such as “Hot in Here,” “Dilemma” and “Country Grammar” dominated the charts worldwide, including places such as the U.K., Germany and Australia. The album “Country Grammar” went 10 times platinum, with more than 10 million copies sold in the U.S. He was certainly a high stakes player, which followed him to the poker tables, where he competed in the World Series of Poker and still plays in the U.S. One video shows Nelly arguing whilst playing poker as recently as last year but also demonstrates his variant of choice; Texas Hold’em. Nelly is seen yelling at another gamer in the video, purportedly for “not knowing how to play.”

Anthrax guitarist Scott Ian is a well-known poker fan who has appeared at the World Series of Poker on more than one occasion. He claimed that playing the game was significantly different to playing live on stage: “When I’m on stage with the band, I know exactly what I’m doing. I have all the information in the world. I know everything that’s going on. Whereas poker is the same amount of rush with a giant mountain of stress on it.” Interestingly, Ian is not just a Texas Hold’em fan; he also enjoys Omaha poker, a slightly different poker variant. He even took part in the 2018 WSOP $10,000 Omaha Hi-Lo 8 or Better Championship event, with a degree of success.

Gladys Knight was known as the Empress of Soul and is best known for hits spanning the ’60s and ’70s with her group, the Pips. She was the first artist to take “I Heard It Through the Grapevine” to the top of the U.S. R&B charts and No. 2 in the mainstream charts. She was also a well-known card fan; her game of choice was Baccarat, something she shared with James Bond in the original “Casino Royale.”

P Diddy has always been known as an extravagant showman, flaunting his wealth in songs and attire. P Diddy is still releasing music; as recently as July, he announced “Off The Grid Vol 1” and has longevity many must envy. He is also perfect for the casino industry, demonstrating such luxury, and coupled with a love of blackjack; he’s a regular in the world’s top establishments. One casino in Atlantic City paid him an eye-watering amount to place the first bet at their newly installed poolside blackjack table, which doubtless delighted the star. He’s also been known to demand a blackjack table backstage at shows to indulge in his hobby.