That’s because, even though the improvising rock band cut its teeth on the Buffalo club circuit, Garvey and his band mates – Rob Derhak (vocals, bass), Al Schnier (vocals, guitars), Vinnie Amico (drums) and Jim Loughlin (percussion) – are fanned out all over the place.

“We went to college in Buffalo and studied there,” Garvey said recently, “but I moved to Cincinnati about five years ago. Rob has moved back to Portland, Maine; Al moved back to New Hartford, outside Utica, and Vinnie lives near Saratoga.”

The distance between them neither hindered the making of “Wormwood,” the group’s debut iMUSIC album (released Feb. 4), nor affects their tour plans.

“At the beginning of tours or before special shows, we’ll get together and rehearse a couple days on specific material,” Garvey said. “We do writing sessions that are about a week or two weeks long. We’ll just hole up somewhere and hammer out new material.”

For “Wormwood,” the group wanted try something different: incorporate sounds from live shows with studio elements. The best way they knew how was using their trademark segues, improvised moments onstage that takes them from song to song.

“For the entire album, we multitracked everything, but we were really going for drums and the rhythm section and going for the feel of a whole band playing together,” Garvey said. “We kept all the drums from the live recording and then improvised in the studio over that. We saved some guitar stuff, but all the vocals and rhythm guitar were redone.

“We also improvised parts in the studio, so some of the segues are intact for the live thing and some are done in the studio. Everything was laid out before we played the live shows, where the original tracks come from.”

Other bands have put live and studio recordings together, but not to moe.’s extent, through a whole album.

“Frank Zappa once took a solo from a song called ‘Inca Rose,’ which he performed live with a band in Helsinki, Finland,” Garvey said. “Then he took the recording home and he made his band play around his guitar track.”

Moe.’s at its best on “Kyle’s Song,” a jazzy tribute to a friend who was hurt in an accident.

“Kyle is a friend of ours from Charlotte, N.C.,” Garvey said. “He owns a silk-screening business, doing T-shirts and stickers and stuff. Sometimes he works for us.

“He came up to Washington (D.C.) for some shows a couple years ago. After the second night, he and his older brother and their friends were leaving to get their car. We were going to the bus and he was crossing the street and this guy came barreling down at 45 mph and hit him. He literally bounced off this car.

“We ran up to Kyle and he said to Al, ‘I think I got hit by a car.’ Al said, ‘I saw the whole thing, Kyle. You definitely got hit.’ He looked at Al and said, ‘You’re a really good friend, Al,’ for witnessing his almost-death. It was kind of a humorous and bad moment. He broke a couple of bones, but he’s fine now.”

Moe.’s fine, too, after 10 albums in the past 11 years. What’s their secret? “It’s hard to say, really,” Garvey said. “As far as we’re concerned, our career has been slowly growing and evolving every time we make an album and go on tour.”

THE FIRST RECORD I EVER BOUGHT: “Either The Police’s ‘Outlandos d’Amour’ or ‘Reggatta de Blanc.’ I can’t remember which, because they came out so close together.”

THE FIRST CONCERT I EVER WENT TO: “It might be Genesis, and then shortly thereafter I saw David Lee Roth at the Utica Auditorium, when I was like in eighth grade. He had Steve Vai and Billy Sheehan. It was a crazy, good band. It was probably the loudest thing I ever witnessed.”

THE WORST JOB I’VE EVER HAD: “I had a dishwashing job that really sucked. It was the only job I got fired from. I was being a slacker at the time.” 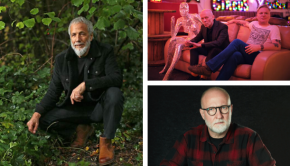