Marc Almond is trying to make up for lost time in the United States. The former Soft Cell singer blames disdainful record companies and indifferent management for keeping him out of the stateside limelight for the past eight years and praises his loyal American fans for keeping the faith.

“I’ve been very busy over on the other side of the Atlantic, especially in Europe,” Almond said recently. “I’ve had three or four albums there since (1991), many tours; I’ve written books of poetry and my autobiography. Not having anything out in the states was very frustrating for me, because my management had become complacent with me and I was hopping from one record company to the next.

“My record company and management thought I was a European artist, and they wanted to gear all their efforts on doing things for me in Europe, where I was already established, so that was strange. They said, ‘Well, we’ll just release your albums on import in America.’ Maybe they didn’t think I was right for the American market, which I find very baffling, because when I have come here, like with (the 1989 LP) ‘The Stars We Are,’ it was quite successful for me.

“Thankfully, I have new management and a new record company and things have changed somewhat, and I’m very happy about that.”

Completing the picture, Almond finally broke his U.S. silence with the Sept. 28 release of his Instinct Records album “Open All Night.” Across 16 tracks (three of which are U.S. bonus cuts), Almond gives seductive readings to stately ballads smothered in pop-noir atmospherics.

“It has a very torch-song feel to it, but I wanted it to have a very ’90s edge as well,” Almond said. “I like to call it trip-hop torch songs. I wanted to get back to doing an album that you could put on from beginning to end and that it would feel like the same album, the same journey, and that it would create a mood. I felt the past couple of albums I had done in England, I started to lose direction. I thought I’d go this way and that way, so the albums would end up sounding like an outtakes compilation or something.

“With this album, I got my confidence back as an artist. I found my voice again. I wanted to strip away the overproduction and do an album that was very introspective, very tender and passionate, what was at the center of my heart. It’s like a late-night journey, a companion album. I also thought it’d be nice to make an album people could make love to. I never felt I had ever done one of those.”

From “Night & Dark” to “Beautiful Losers,” Almond’s 10th solo album is an understated gem of musical textures and emotions. For good measure, Siouxsie Sioux and Budgie (of Siouxsie and the Banshees) and Sneaker Pimps’ Kelly Ali contribute vocally.

“Bedroom Shrine” and “Almost Diamonds,” in particular, are adventurous, going on what one music critic described as “slo-core techno” excursions. Not surprising considering the source: as Soft Cell, Almond and partner David Ball helped pioneer the techno movement in 1981 with its first U.K. single, “Memorabilia,” often cited as the first techno hit.

“I would probably agree with that, but then again I’m biased,” Almond said, laughing. “It probably was one of the first records of that genre, that very repetitive beats with electronic effects, a very linear track that which has become the standard dance track now. We were very influenced by the New York band Suicide and loved the underground bands over here who used these very repetitive basslines. We took a bit of our inspiration from that. Music is a continuing journey; everybody takes some inspiration and borrows and steals from other people occasionally. That’s what keeps it evolving and changing, so it’s nice if people cite Soft Cell as an influence on what’s happening in current dance music.”

Part of the new-wave invasion of the early 1980s, Soft Cell had several big hits in its native England, but Almond and Ball were one-hit wonders in the United States. But oh what a hit: “Tainted Love,” a cover version of an obscure 1964 soul song by Gloria Jones, took a long, torturous climb up Billboard’s pop chart. It didn’t reach the Top 10 until its 26th week, and after peaking at No. 8, it made an equally slow descent. It stayed on the chart for 43 weeks, breaking the previous longevity mark set in 1978 by Paul Davis’ “I Go Crazy.” (That record has been shattered several times since.)

Almond forever will be identified with “Tainted Love” and he has no problems with that now, but he admits it took years to accept it.

“It has been a double-edged sword,” he said. “It opened doors for me and closed doors for me. Soft Cell was very much an underground band before ‘Tainted Love’ became a huge record everywhere. I think people thought we were this little pop band and that maybe there wasn’t much more to us. That was frustrating, because ‘Tainted Love’ was just part of what we were about.

“I got tired of it for a while. When I would hear it on the radio, I’d go, ‘Oh, no, ‘Tainted Love’ again?’ There’s a time in your life where you run away from your past; everybody does that. Then you come around full circle and then you start to face it and embrace it. You have to, otherwise it just drives you crazy.

“At some point, I threw my hands in the air and said ‘Okay, ‘Tainted Love,’ great!’ I’m really glad people love it. It was a distinctive, classic original-sounding record and it inspired people.”

Soft Cell material has even made its way back into Almond’s live shows.

“I didn’t sing any Soft Cell songs for 10 years,” Almond said. “I went off and did my own thing, but years later, I put one of the songs back into the (live) set, like ‘Torch’ or ‘Bedsitter,’ and then you see the reaction from people. It’s so fantastic. Now I’ve earned the right to sing them again. I look back on my back catalog, which I own now, and I’m very proud of the things I’ve done. I do those songs again quite happily.”

BWF (before we forget): For the latest on Marc Almond on the Web, visitwww.marcalmond.co.uk. 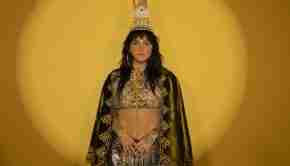