Juliana Hatfieled has ‘Only Everything’ to give

Juliana Hatfield isn’t sure what it was, but something brought her out of her studio shell.

On her new Mammoth/Atlantic album, “Only Everything” (due March 28), the former Blake Babies singer adds more taut guitar to her sweet, angelic voice. On tracks like the first single, “Universal Heart-Beat,” the revved-up touch suits her well.

“I don’t know what came over me,” she said recently from her New York apartment. “I just decided to stop screwing around and stopped being scared, and I just played harder.

“That’s why I’ve been so frustrated with my music because I knew that I was always holding back so much, and I’m still holding back somewhat, but I’m learning to loosen up and let go.”

Despite the new burst of energy and confidence, Hatfield’s insecurities remain.

“You’re making yourself vulnerable,” she said. “You could be laughed at and you could screw up. Or you could lose control. That’s a fear, that once you open up and let go, that you might not be able to get control back.”

For now, the former Berklee College of Music student is grappling with fame – as an alternative-pop star, for her widely publicized friendship with Evan Dando of The Lemonheads, and outside projects, like starring as a homeless teen in an episode of ABC’s “My So-Called Life.”

Her acting stint garnered favorable reviews, but the 27-year-old Duxbury, Mass., native said she has no real acting ambitions. She would rather write a movie, most likely when she reaches 40.

She has thoughts on why critically acclaimed “My So-Called Life” was a ratings dud.

“I think it’s too real,” she said. “People don’t have the attention span for it. To watch that show, you have to devote your attention to the whole hour, because it moves kind of slow, like real life does. You have to make an effort to get into it, but people who watch TV want their entertainment fast and in their face, glamorous and visual.

“And it didn’t have any happy endings. People want happy endings on their TV shows. It was the same thing with ‘Twin Peaks’ … I thought that was the most brilliant show ever.”

On “Only Everything,” Hatfield delves into the complexities of life and death.

“I think about death all the time,” she said. “I think being aware of it maybe will help you live life more fully. That’s what I’m always struggling with … I’m afraid I’m not living enough life, that it’s going to be over before I know it.”

No matter how well “Only Everything” does, Hatfield said, in self-deprecating fashion, she will remain true to herself. 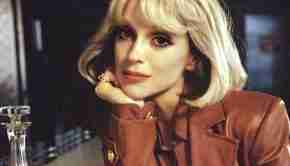