It’s still the time for the season of The Zombies

Chris White can’t help but laugh. Last November, the British rock quintet shared the same stage for the first time since its December 1967 breakup, brought together for a launching party for the release of the acclaimed box set “Zombie Heaven” (Ace).

“We never had played it onstage before, because at the time when it was a hit (1969), we had split up many months previous,” White said recently. “There’s a fadeout on the record, so we had to discuss quickly how to end the thing.”

That alone describes the Zombies’ history.

The group was part of the Beatles-led British Invasion in 1964, quickly distinguishing itself from the pack with the keyboard-driven “She’s Not There” and “Tell Her No.” Critics hailed the band’s clever lyrics and soaring melodies and harmonies, but many felt the Zombies were too melancholy and complex for radio airplay.

After recording its most cohesive album, “Odessey & Oracle,” in 1967, the group became disheartened over the lack of recognition in Britain. Columbia Records’ refusal to release the LP in the states only sealed their fate; they disbanded and started their own projects. Meanwhile, Columbia staff producer Al Kooper continued the battle, convincing the label to reconsider. It finally relented in early 1969 and reaped the benefits of the album’s million-selling track “Time of the Season.”

“We weren’t earning any money on the road, the gigs were drying up,” White said of the breakup. “We weren’t getting any recognition. We thought we had done a great album. … Rod and I were able to live because we had song royalties, but the others weren’t earning any money. We never made any money on American tours. I think the most we ever made was 500 pounds each for a six-week tour with Dick Clark.”

“Odessey & Oracle” was reissued on CD by Ace in late May, with stereo and mono versions of all 12 cuts. Today, it’s often mentioned in the same breath as the Beach Boys’ “Pet Sounds” and the Beatles’ “Sgt. Pepper’s Lonely Hearts Club Band.”

“I’m so knocked out to hear ‘Odessey & Oracle’ talked of in that company,” Argent said recently. “That’s rarefied air, really.”

Argent said “Time of the Season” was the last track he wrote for “Odessey & Oracle.” He had a feeling it would be a hit.

“But of course nobody shared that, except Al Kooper,” he said. “He was our savior. It wouldn’t have come out in America if it hadn’t been for him. And if it hadn’t been a hit in America, then a lot of things wouldn’t have happened. For instance, in England, it was never a hit, but it appeared on one of the first rock compilations and it became a cult classic and many people knew it through that over here.”

In retrospect, White wishes the Zombies had lasted longer than two studio albums over three years, “but I find ‘if-onlys’ difficult because I wouldn’t be who I am today. If you change anything in the past, the future changes. And we got some great things going with Rod’s group Argent (‘Hold Your Head Up’) and we (produced) Colin Blunstone’s first three solo albums. I don’t regret anything, I’m just glad for the all the good times we had. It was fun, and we were young.”

These days, White creates backing music for British TV shows and nurtures the careers of new artists, while Argent said he and former Argent guitarist Russ Ballard are writing songs together and planning an Argent comeback tour next year.

“What happened last year was,” Argent said, “we played a couple of charity gigs, and it was such a buzz doing it, and everybody’s playing better now that we did when we were in the band. It was great, so we thought about it just for the buzz, not as a major career move.” 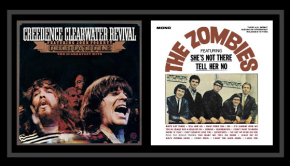