A soul-searching stroll through the Florida State Fair a few years ago helped Henry Paul see the light – the country light, that is.

Amid the cotton candy stands, you-don’t-have-a-chance-of-winning games and the smell of livestock exhibitions, Paul slowly began to realize he was headed in the right direction by finally laying perennially popular Southern-rock act The Outlaws to rest and setting his sights on Nashville.

“I was walking around the fair and seeing people there for a country show,” Paul said recently. “They’re in their cowboy boots and their jeans, and it really reminded me of who I am. It reminded me a lot of the people who came to see me play, and I knew, without question, that was where my audience lied.”

The first person the Tampa-based singer-guitarist wound up writing a song with in Nashville was Van Stephenson, who – with partner Dave Robbins – penned many hits for Restless Heart and others. Fast forward a few years, and the three now are collectively known as BlackHawk, whose self-titled debut Arista album is closing in on 1-million in sales.

Paul’s leap to Music Row is a natural progression for an artist weaned on Johnny Cash, Gram Parsons and Flatt & Scruggs. It was never an attempt to jump on the country bandwagon.

“One of the reasons I got out of The Outlaws,” Paul said, “was because they ceased to want to do what I set out to do and that was make country-rock music.

“My whole reason for being, musically, was to bring country music into popular music and try to offer up a version of bands like Poco and Buffalo Springfield that changed my life. It’s safe to say that rock ‘n’ roll from every era has always been somewhat fused with country music, whether it was Elvis, Johnny Cash, the Everly Brothers or Jerry Lee Lewis.”

After 13 years, off and on, with The Outlaws, Paul saw the writing on the wall.

“Like anything, you have to give it a rest,” he said. “The horse can only take you so far. It’s one of those deals where I had to re-invest a great deal in myself musically to find a new direction.”

With BlackHawk, Paul has found the perfect outlet for his brand of Eagles-like country-pop melodies. The result: three straight Top-10 country hits, “Goodbye Says It All,” “Every Once In a While” and “I Sure Can Smell the Rain.” A fourth single, “Down in Flames,” is on the way.

He has come a long way since many lean years between bands and careers.

“Dave and Van are my partners in this band,” Paul said. “I can honestly say that I’m happily married to both these men musically and personally.

“I help them, they help me, and they help each other. Three heads are better than one.”

BWF (before we forget): “BlackHawk” charted for nearly two years and sold more than 2 million copies, while the follow-up, “Strong Enough,” was awarded a gold record in 1995. The group’s third album, “Love & Gravity,” was released in August 1997. … Stephenson died of cancer in 2001. 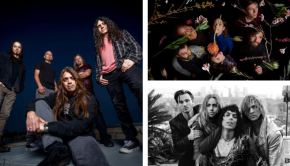