For your listening pleasure: Sevendust

CONNOLLY: “Actually, I called it. I told everybody in the band and management, ‘You just watch, after we release our record, there’s going to be a greatest-hits record.’ Ironically, the last thing that TVT released was also a greatest-hits album, ‘Southside Double-Wide,’ an acoustic record that was basically our greatest hits. The set list on those albums are almost the same. ‘Chapter One’ has some rarities and other stuff that was never released.”

P&P: They’re trying to cash in while they can.

CONNOLLY: “Absolutely. Get it while it’s hot. At the end of the day, it’s a greatest-hits record and I’m really proud of the songs on that record. But, on the flip side of it, it just seems like taking advantage of our fans too much. I mean, how many greatest-hits records do you need? And now there’s a box set coming in April? We really only had five records. I’m like, ‘You guys just kill me.’ “

P&P: Do you remember doing those two covers, “School’s Out” and “Inner City Blues” (included on “Chapter One”)? Were those intended for an album?

CONNOLLY: ” ‘School’s Out’ was actually supposed to be on the first ‘Scream’ soundtrack. Instead of paying for the rights to use Alice Cooper’s version in the movie, they thought, ‘We’ll just get a couple of newer bands do a cover version.’ They heard ours and it scared the shit out of them a little bit. It was too heavy. Then they had Sebastian Bach, and his version was a little too light. They ended up just forking out the 60-grand to use Alice Cooper’s version in the movie.

“For ‘Inner City Blues,’ we were looking at doing a cover of either a U2 or Depeche Mode song or doing ‘Inner City Blues.’ TVT had wanted a cover; they had been asking for one ever since we did ‘School’s Out.’ That’s just not the kind of band we are. Everybody decided we were going to do ‘Inner City Blues,’ and it was cool, but it was put on the CD as a bonus, hidden thing on the ‘Seasons’ album. I think they underplayed it. They didn’t utilize it as much as I think they could have.”

CONNOLLY: “You know what, I’m not going to sit here and bash them. I’m going to speak as honestly as I can here, on the first two records, TVT did a phenomenal job with this band. They revolutionized the way you could market a band. In addition to the fact that we played nearly 500 shows during those first two records, they spent a lot of money on the first two albums, and they did it in very innovative ways. Instead of shooting a video and taking it to MTV and being out 200-grand minimum because MTV doesn’t play brand-new bands anymore unless it has a whole lot of radio-buzz behind it, TVT said ‘We’ll buy TV spots with an infomercial.’ It followed wrestling and came on after Leno. Sales went absolutely through the roof. It was a brilliant idea. They had a great marketing strategy behind the second record, too.

“Then we started screwing it up a little bit; the timing got weird. When we made ‘Animosity,’ that’s when things got strange. The first two records, they totally understood what kind of band we were. With ‘Animosity,’ they started listening to stuff that was coming in, like emo was in its infancy. It was trendy and cool. They started dropping hints around us. We’re like, ‘You’ve got to be kidding me. You want us to be like that?’ We went into the ‘Seasons’ record and we fought with them over the producer; they wanted us to work with a serious songwriting kind of producer. And we finally gave in and said, ‘OK, only if it’s Butch Walker,’ because he’s the guy who worked with us on our first demo and basically got us signed. They loved the idea, and I love ‘Seasons.’ But they totally dropped the ball on it.”

CONNOLLY: “Not as well as I expected it. It’s not bad, but for a new label, we’re trying to teach them as we go. There’s a lot of growing pains, for sure.”

P&P: All in six months, you guys went through new management, you left TVT, you got a new guitarist (Mayo, formerly of Snot). That would’ve broken up most bands. What kept you guys going?

CONNOLLY: “… because we’re real hard-headed. I remember sitting in the bus – Clint (Lowery) was still in the band – and we had realized what his situation was before he realized it. He only really wanted to do his side project, Dark New Day, and their record deal was contingent on him being a regular member of the band. So he’s like, ‘Do I screw over my band (Sevendust) or do I screw over my brother (Corey Lowery, Dark New Day’s bassist)?’ He wanted to know if he could go out with them six or eight months and I said no. My wife was seven months pregnant and I couldn’t take a year off, especially after we had just gotten out of the TVT deal. I remember looking at the others and thinking ‘We know what’s going to happen here.’ I think it was Morgan who said, ‘Is anyone thinking of quitting?’ and we all shook our heads.”

P&P: Now you must feel relieved that you can concentrate on the music.

CONNOLLY: “That and not having to stress over your finances and bills. We don’t live high on the hill; this isn’t ‘Lifestyles of the Rich & Famous.’ We have very modest lives, but we do have lives. We all have kids. There’s people at home depending on us to be making the bacon.” 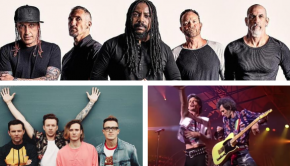