Pause & Play: You’ve said you wanted to make an album that sounded like 1940s-’50s recordings where the piano is soft and beautiful. Did you draw from any particular inspiration, a particular recording?

Lanois: “Yes of course, many greats of the piano have inspired me. With regard to tone and sound, I do reference piano sounds from the ’50s, as a time when softness and warmth were a big part of the vibe.

“You can hear the great Floyd Cramer on Patsy Cline‘s ‘Crazy’ for example, such a beautiful relaxed inviting sound, played with soft touch. Then swing on over to Bill Evans, that great era when he played with Miles and then of course all of Bill’s solo works. Oscar Peterson continues to break my heart, what a force, and a Canadian kid!

“There is an Erik Satie recording that we like, played by Anne Queffelec. It’s an’ 80s recording, I believe, with a clear unhurried performance, the piano breathes nicely, much like Floyd Cramer’s playing.

“Brian Eno brought Harold Budd and Roger Eno to my studio in the early ’80s, we went on to make soulful records with much piano feature,
those sounds remain an inspiration.”

Pause & Play: Knowing that you created the melody of “My All” for your brother, Bob, who died last year, was it an emotional experience recording it?

Lanois: “Yes, ‘My All’ is a send-off for my brother. There’s a lyric to this song that makes sense of the send off, which I will include in a later recording. You ask about emotions and loss, well for sure the loss of a brother is part of who I am, his great friendship will always be missed. He was a brilliant mind.”

The CD version of “Player, Piano” will be out Oct. 14, and the vinyl edition will be released on Nov. 18. 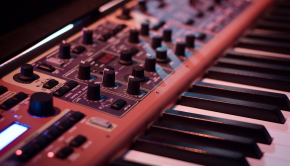 5 things only people who play digital pianos would understand → Head East still in the game →