Bouncing Back, For Good

Vicki Peterson wants to make one thing clear: The Bangles are here to stay.

“Doll Revolution,” their first studio album since 1988, is proof that they mean business. Released Sept. 23 onKoch, the power-pop album – produced by the band and Brad Wood – is exactly what fans might expect from one of America’s most accomplished female rock bands.

It’s as if they had never left.

“I wasn’t at all interested in doing something that was going to be ‘Let’s do a reunion tour, the House Payment Tour,’ and recycle the old hits,” Vicki Peterson said recently. “I was only interested in it if it was going to be a viable musical entity, actually functioning as the Bangles with the same ideals we had when we started in 1981.”

One listen to the rollicking opening track, the Elvis Costello-penned “Tear Off Your Own Head (It’s a Doll Revolution),” is all it takes to convince skeptics.

The song first appeared on Costello’s 2002 LP “When I Was Cruel,” but Peterson says they intended to record it even before he did.

“He was originally using that as a pilot for a TV series he’s trying to get picked up, about a girl group,” she said. “He had called Susanna and wanted a female voice. But it was his voice on the original demo and nobody was getting it because people don’t have enormous imaginations and hear Elvis as a female. So he called Susanna and Michael. I was down in Louisiana so I couldn’t be part of the fun.

“Once they recorded the vocals for the song, Michael fell in love with it. She kept saying, ‘We have to do this song.’ When we finally got to the studio to record this album, that was definitely on our to-do list.”

The Bangles shine elsewhere, on “Something That You Said” (the first single), “Ask Me No Questions,” “I Will Take Care of You,” “Between the Two” and the psychedelic-tinged “Stealing Rosemary.”

“When we did this,” Peterson said, “the whole focus was just to go in and see what we had to say. It was very much high hopes, low expectations, more to please ourselves in a very self-indulgent and not worry about how it would be received.”

“Doll Revolution” swept first through Europe in March, via Liberty. At the time, the group didn’t have a U.S. label deal.

“For us, it was a matter of who came to bat first,” Peterson said. “We had this project completely ready, had the video shot, did this all ourselves – and then we started bringing it to people to see who we wanted to partner with and license the project to.”

Koch came out on top, and has issued the album with a bonus DVD featuring videos, unreleased tracks and “A Day in the Life of the Bangles” photo gallery.

Doing it their way was the only way, Peterson says.

This is not a one-off situation, Peterson says. They will record another album.

But this time around, many years removed from their No. 1 hits “Walk Like an Egyptian” and “Eternal Flame,” the Bangles have a different attitude.

“This isn’t a marriage anymore,” Peterson says. “When we were the Bangles in the ’80s, we lived, breathed, ate, swam the Bangles. It really consumed our lives. Our lives are a little more complicated these days. There’s kids, there’s husbands, there’s dogs. There’s other musical projects.

“The Bangles fit in there as part of the puzzle, not the entire puzzle. And believe me, on a daily basis, we are struggling to balance everything, but this is the way it has to be. We’re all in agreement on that. We’ll be working hard to promote this record, but it won’t be the only thing we’re doing.”

Peterson, in fact, has plenty on her mind. In a few weeks, she’s marrying John Cowsill, the drummer in the 1960s family pop group The Cowsills.

“My head is exploding,” she said. “I’m amazed I can put a sentence together, I’m so distracted by many other things.”

Cowsill is firmly in her corner, she says.

“I’ve known him since we were very young adults. His baby sister (Susan) is one of my lifelong best friends. The funny thing about our dynamic is that when the Bangles had all the success in the ’80s, John was kind of out of the music industry. He was doing other things, and he and I weren’t really in touch. So John never got to experience me as a Bangle. Now he feels like he’s getting a second shot. He’s got a crush on Vicki, the Bangle.”

THE FIRST RECORD I EVER BOUGHT: Peterson laughs loudly. “You won’t believe this. It was the ‘We Can Fly’ album by the Cowsills. I bought it with my allowance money. This is true; this is archived. I’ve answered this question before I was engaged to the drummer.”

THE FIRST CONCERT I EVER WENT TO: “I was like 7; I went to Creedence Clearwater Revival with my father, at the Forum. I think we were sitting literally at the roof line. We were so far back, but my dad brought binoculars and they were glued to my face.”

THE WORST JOB I’VE EVER HAD: “I took a quarter off from UCLA; I was very unhappy. I had to make some money, so I took this job modeling at lunchtime fashion shows at restaurants that catered to businessmen. It’s the closest thing to stripping. It was so humiliating, because they weren’t looking at the clothes. I did it for two weeks and quit.” 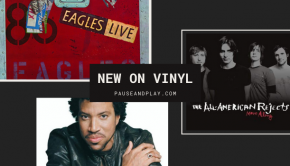