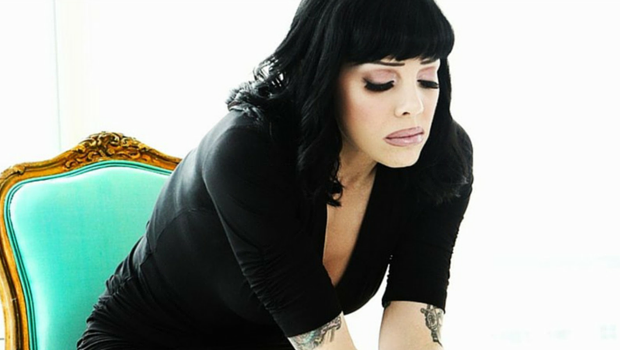 No subject is taboo for rock newcomer Bif Naked. Not even the contentious topic of abortion.

On “Chotee,” a poignant track off her debut Lava/Atlantic album, “I Bificus” (released Aug. 3), the Vancouver-based singer-songwriter pours her heart out for the unborn child she gave up years ago.

“It’s not a yea or nay song regarding pregnancy termination,” Naked said recently. “I’ve always been a pro-choice girl, but the anguish you go through making a decision like that – regardless of which way you decide – you’re going to feel that anxiety or your heart is going to ache, no matter what. That song can be taken two ways: the loss of a love, for the marriage or for the man, what could have been. People have their own interpretations for the song. I haven’t had too much flak about it.

“I was a substance abuser when I was young. I didn’t go straight-edge until 1995 and so I really know, even though I have a lot of feelings of regret and heartache over that time in my life, I also do believe and really have to believe that it was for the best. I don’t know what state that child would have been in, because I was essentially a substance-abusing little skateboarder. We didn’t even realize I was pregnant for a long time. It was a decision that ultimately was the right decision, but I also have to live the rest of my life believing that.”

Elsewhere, Naked isn’t afraid to mince any words on her strong U.S. debut, tackling religion, love and bisexuality. She attributes her breath-of-fresh-air honesty to her parents, two American missionaries who adopted the New Delhi-born orphan in the 1970s.

“I don’t have anything to hide,” Naked said. “Honesty is what inspires me to write a song. The fan base I’ve developed over the years, they’ve kind of come to expect it, so I don’t have a lot of fear.”

That fan base has turned Naked into a pop icon in Canada, where she released her second album, “I Bificus,” in March on her own label, Her Royal Majesty’s Records. She toured 11 months out of the past year and also performed in Europe before catching the eye of Lava president Jason Flom.

“I came down (to New York) to do a show, and (Jason) happened to be around the vicinity,” Naked said. “I’ve never been the kind of artist who’s played by the rules. It’s definitely a company that likes to take things to their limit and push the envelope. I can’t tell you how really lucky I feel. Everyone is just so positive. There’s much so energy, no smoke and mirrors.”

The same can be said for Naked’s far-flung influences. On the first single, “Moment of Weakness,” she displays rock-savvy aggression in the tradition of Chrissie Hynde and Patti Smith. She’s equally comfortable with power ballads, like “Lucky” and “Violence.”

“That diversity is from having lived in India when we were little,” Naked said. “My parents were American, but we also listened to Indian music. My parents were Glenn Miller and Nat ‘King’ Cole freaks, so we listened to that a lot. Then I got a record called ‘Unleashed in the East’ by Judas Priest when I was 13 or 14. Then I started listening to hard music.

“Then Madonna happened. I heard ‘Holiday’ when I was in high school and it changed everything. I loved Iron Maiden, Madonna and Prince and Culture Club. Probably my favorite band right now is Buena Vista Social Club, and classical Indian music will always have a place in my heart. I’ve been very lucky to have so many fingers in the sonic pie, so to speak.

“My album’s really all over the map. I’ve been so lucky to be able to do that with very little repercussions. I have so many different styles of CDs in my collection at home. I never thought there was any reason to make it one style on a record. I never set out to do a fast song and a slow song, then a medium song and a fast song. It was never like that. I’ve never felt any hindrance by the style of song.”

“My mother stuck us in ballet class,” Naked said. “I was in ballet for like 12 years. I enrolled in the University of Winnipeg to take theater. These guys in my theater class had a thrash band, and their singer quit. They had a gig opening for a band called DOA, and so I filled in, and I’ve been on tour ever since.

“My parents have always been bleeding-heart liberals, so they’ve always been real supportive. My dad used to come see me play in all the skateboard parks and sing my little ‘Fuck you, fuck you’ lyrics. He’d go, ‘Gosh, kid, I don’t know what you’re saying. I can’t understand you, but you sure can jump up and down.’ I’d be like, ‘Thanks, Dad.’ “

THE FIRST RECORD I EVER BOUGHT: “My first record actually was a gift from George, my boyfriend in grade eight. He gave me ‘Unleashed in the East’ by Judas Priest. My sister had the first Motley Crue record, so we listened to ‘Shout At the Devil’ all the time too.”

THE FIRST CONCERT I EVER WENT TO: “It was the Iron Maiden ‘Powerslave’ tour with Twisted Sister as the opening act. What’s really funny is, I listened to a lot of Twisted Sister back then, and then it turns out Jason (Flom) discovered them. When I found that out, I said to him, ‘Dee Snider spit on me at a concert in 1984!’ I was in the fourth row with my sister; she was like 8. I can’t believe my parents actually let us go to that by ourselves. I was smoking cigarettes, I was like 11 or 12, trying to get my little sister to smoke ’em too. She was crying the whole show, bawling her eyes out. I was going, ‘Shut up, shut up, stand on the chair!’ Dee Snider spit on us, it was the thrill of my life. And they wore more makeup than I do today.”

BWF (before we forget): Let Bif Naked dress you up on the Web @ www.bifnaked.com.

Your Music Book Store (April 19 and Beyond) →