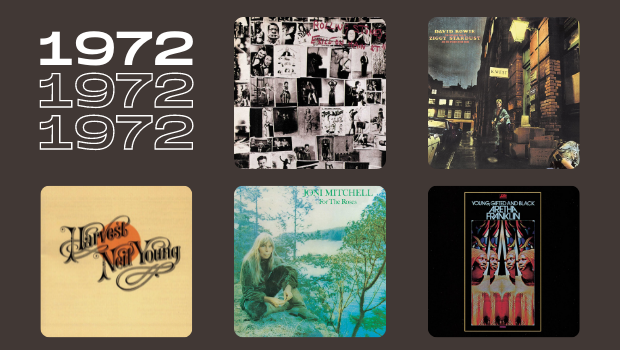 Fifty years ago, in 1972, John Lennon’s U.S. immigration visa expired, setting off a three-and-a-half-year battle to remain in the country; Carole King dominated the Grammy Awards with her 1971 album “Tapestry,” ABC’s “In Concert” premiered, and Dick Clark’s “New Year’s Rockin’ Eve” aired for the first time on NBC, before shifting to ABC in 1974.

Of course, there were some classic albums throughout that year. Like …

“Jackson Browne,” Jackson Browne (his debut album, aka “Saturate Before Using,” featuring “Doctor, My Eyes” and “Rock Me on the Water”; producer: Richard Sanford Orshoff; Asylum)

“Harvest,” Neil Young (his fourth solo album, featuring his one and only No. 1 hit, “Heart of Gold,” plus “Old Man” and “The Needle and the Damage Done”; producers: Young, Elliot Mazer, Henry Lewy, Jack Nitzsche; Reprise)

“Eat a Peach,” The Allman Brothers Band (double album contained studio recordings with and without the late Duane Allman, who was killed in a motorcycle accident on Oct. 29, 1971, as well as live recordings from their legendary Fillmore East performances; featuring “Melissa” and “Blue Sky”; producer: Tom Dowd; Capricorn)

“Pink Moon,” Nick Drake (his third and final album; he died two years later; the title song enjoyed a revival in 1999 when it was used for a Volkswagen ad campaign; producer: John Wood; Island)

“Music of My Mind,” Stevie Wonder (his 14th album, featuring “Superwoman [Where Were You When I Needed You]” and “Keep on Running”; producers: Wonder, Malcolm Cecil, Robert Margouleff; Tamla)

“Thick as a Brick,” Jethro Tull (a spoof of concept albums, it contained one continuous piece across two sides; it reached No. 1 on the U.S. album chart; producer: Anderson; Chrysalis)

“Machine Head,” Deep Purple (their sixth album was intended to be recorded at the Montreux Casino, but it burned down during a Frank Zappa concert, which inspired the band’s signature hit, “Smoke on the Water”; producers: Deep Purple; Purple)

“Still Bill,” Bill Withers (his second album contained two big hits, “Lean on Me” and “Use Me,” and the infamous “Who Is He [And What Is He to You]?”; producers: Withers, Benorce Blackmon, James Gadson, Melvin Dunlap, Ray Jackson; Sussex)

“The Harder They Come,” Jimmy Cliff (soundtrack album to the film of the same name, starring Cliff; it features Cliff’s “Many Rivers to Cross,” “The Harder They Come” and “You Can Get It If You Really Want It,” plus early reggae hits by Desmond Dekker, Toots and the Maytals, The Melodians, etc.; Island)

“Super Fly,” Curtis Mayfield (his fifth album was the soundtrack to the Blaxploitation film of the same name, featuring “Freddie’s Dead” and “Superfly”; Curtom)

“Never a Dull Moment,” Rod Stewart (his fourth album, featuring “You Wear It Well,” “Angel” and “Twisting the Night Away”; producer: Stewart; Mercury)

“#1 Record,” Big Star (their debut album was hailed by critics but sold poorly and didn’t gain wide appreciation until years later; “In the Street,” covered by Cheap Trick, was used as the theme song for the hit TV series “That ’70s Show”; producer: John Fry; Ardent)

“All the Young Dudes,” Mott the Hoople (their fifth album, featuring the title track, was produced by David Bowie; Columbia)

“Close to the Edge,” Yes (their fifth album and their last with original drummer Bill Bruford, featuring “And You and I”; producers: Eddy Offord, Yes; Atlantic)

“I’m Still in Love With You,” Al Green (his fifth album yielded three hits: the title track, “Love and Happiness” and “Look What You Done for Me”; producer: Willie Mitchell; Hi)

“Talking Book,” Stevie Wonder (his second album of the year, featuring his No. 1 hits “Superstition” and “You Are the Sunshine of My Life”; producer: Wonder; Tamla)

“No Secrets,” Carly Simon (her third album was her most commercially successful, spending five weeks at No. 1 on the U.S. album chart, powered by her No. 1 smash “You’re So Vain,” plus “The Right Thing to Do,” “His Friends Are More Than Fond of Robin” and “We Have No Secrets”; producer: Richard Perry; Elektra)

“Seventh Sojourn,” The Moody Blues (the group’s first No. 1 album in the U.S., featuring “I’m Just a Singer [In a Rock and Roll Band],” “Isn’t Life Strange,” “New Horizons” and “Lost in a Lost World”; producer: Tony Clarke; Threshold)

“For the Roses,” Joni Mitchell (her fifth album, featuring her first Top 40 hit, “You Turn Me On, I’m a Radio”; some of the songs were inspired by her relationship with James Taylor and its dissolution; producer: Mitchell; Asylum)

“Can’t Buy a Thrill,” Steely Dan (their debut album, featuring the hits “Do It Again” and “Reelin’ in the Years,” plus “Dirty Work,” “Brooklyn [Owes the Charmer Under Me],” “Midnite Cruiser” and “Only a Fool Would Say That”; producer: Gary Katz; ABC)

“The World Is a Ghetto,” War (their fifth album was their biggest, spending two weeks at No. 1 on the Billboard chart, led by the hits “The World Is a Ghetto” and “The Cisco Kid” and the popular instrumental “City, Country, City”; producers: Jerry Goldstein, Lonnie Jordan, Howard E. Scott; United Artists)