Adventures in poptopia: Retrofitting with Sloan and junior cottonmuouth

First, there’s power: a great ability to do and act with strength and force. Then, there’s pop: music that’s popular with the general public.

Put them together and power pop means everything you might expect. It’s upbeat, energetic, melodic, catchy and lyrically fun. It’s as old as those scratchy 45s by Elvis Presley and Buddy Holly and still fresh in today’s CD age of Matthew Sweet, Fountains of Wayne and the Rembrandts.

Present-day power pop isn’t much different than the three-minute gems of Badfinger and the Raspberries from the 1970s, when the phrase was first coined. It’s simple, back-to-basics, garage rock ‘n’ roll.

Critics may dismiss today’s champions of power pop as nothing more than rock recyclers, but where’s the harm in a band paying homage to pioneers such as the Beatles, Who, Kinks, Small Faces and the Byrds?

“I don’t want to be accused of being retro,” Sloan lead singer Jay Ferguson said recently, “because there are some new records that we really like, too. We don’t jump on bandwagons. It’s more like trying to get the perfect sound.”

“One Chord to Another,” the Halifax, Nova Scotia, rock quartet’s debut album for The Enclave, is a paradox, both fresh and familiar. It’s a far cry from when the group first appeared in 1992, signed to DGC and “Smeared” all over grunge-hungry modern rock radio.

Junior cottonmouth, a four-member group from south London, are chips off the old Kinks block, as evidenced in its Atlantic debut album “Bespoke.”

“As far as lyrical content and the guitar sound, I can understand why people compare us to them,” lead singer-guitarist Paul Breuer said. “I don’t think there’s any direct ripoffs or copying in there. There’s just a general sort of feeling, I hope, of the sort of romanticism and idealism playing in the lyrics. To me, that’s what the Kinks were all about.”

On “One Chord to Another,” a fine-tuned Sloan tips its hat to such influences as The Who and T. Rex. Ferguson said it was done “pretty consciously” but solely out of respect and admiration.

“We do listen to Who records,” he said, “but it’s not like we’re trying to rip them off. As far as the production, we were aiming for that style, especially the drums. We recorded the drums on a four-track through the whole record to give them a certain sound.

“In a studio these days, they put so many microphones on drums that they end up sounding so perfect. I think if you just put a couple there, you get a different sound and that’s what we were going for.”

Junior cottonmouth is a refreshing change from the British brashness of Blur. “Bespoke” tracks such as “Something Scratching,” “Rocket” and “Stand By Your Man” are brimming with that ol’ power-pop hook-sense.

“For me, Blur sort of plays up to a cartoonish Englishness at times and I don’t think they do it particularly sincerely,” Breuer said. “I think our lyrics are good. I think what lets down some power-pop bands is that the lyrics are poor. You know, the ‘baby, baby, baby, I love you,’ which is good in its own way but over a whole album it can get dull.”

“Our three albums have like a lineage,” he said. “The first one sounded more like My Bloody Valentine or the stuff coming out of Creation (Records). Then our second record was more like Velvet Underground or Fleetwood Mac, a more tempered pop album. This new one fits well with our other records.”

Sloan had a falling out with DGC over that transformation. The label wanted another “Smeared” and instead got the distinctly different “Twice Removed.”

“They didn’t know how to market it, because it was a pop record,” Ferguson said. “They couldn’t follow the lineage because it was so different. They asked us to go re-record it and we declined. We told them this was the album we wanted to make. So they said, ‘Yeah, we’ll put it out but don’t expect much help behind it.’

“We tried to tour for the record, but it was pretty frustrating because there was no promotion at all.”

The band split up for a year, with Ferguson watching over Murder Records, their own independent label in Canada. Anxious to prove everyone wrong, they teamed again for “One Chord.” Surprisingly, it was greeted warmly by noted pop snob Rolling Stone magazine. What’s not to like in tracks like “The Good In Everyone,” “Junior Panthers” and “Everything You’ve Done Wrong”?

“Not to sound obnoxious,” Ferguson said, “we think it’s pretty excellent. It turned out the way we wanted it to. We’re proud of all our records. How many bands can say that when they look back at their stuff? Usually, there’s at least one that they cringe over. That’s not the way with us.”

BWF (before we forget): Sloan’s U.S. record company, The Enclave, folded in the fall of 1997. The group released its follow-up album, “Navy Blues,” on its own label, murderecords, in July 1998. 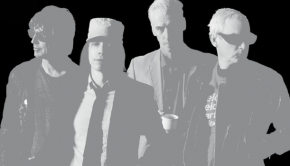