A special WTHAT (Where the heck are they?): Danny O’Keefe

Somebody up there likes Danny O’Keefe.

A year later, after his self-titled debut album failed to chart, O’Keefe’s second effort – simply titled “O’Keefe” – featured “Good Time Charlie’s Got the Blues,” one of the songs O’Keefe sang over the phone to Ertegun. The country-tinged classic cracked Billboard’s Top 10 in early November 1972, but it turned out to be O’Keefe’s one and only hit.

“The downside to having a hit is that like all good drugs, you must have another, or at least the record company must,” O’Keefe said recently. “In retrospect, I think I would have preferred that someone else had the ‘big hit’ and I the respect of having written it.

“Having a career as a writer was always my goal and it’s taken me many years to really learn the art of performance, which I don’t believe I had in those early years of recording. The recording studio and musicians provided an incredible palette to paint songs with, but I needed more direction as to the performance end of things. Obviously, at least in retrospect, I lost some wonderful career opportunities out of immaturity and ignorance.”

Still, it was reassuring when “Good Time Charlie” was covered by a slew of artists, from Elvis Presley to Dwight Yoakam. Mel Torme, one of the all-time great song stylists, performed it in a poignant episode of the 1980s sitcom “Night Court.”

There were other songs, too. Jackson Browne did O’Keefe’s “The Road” on his “Running on Empty” album; Judy Collins covered “Angel Spread Your Wings,” and Donny Hathaway and Leo Sayer both did versions of “Magdalena.”

O’Keefe’s solo career did not end with “Good Time Charlie.” He recorded two more albums for Atlantic and two for Warner in the 1970s.

Was everyone looking for another “Good Time Charlie”?

“Like any investment, expenses are justified by returns,” O’Keefe said. “A hit is an advertisement for an artist and creates marketability. Had I understood the need for hits more thoroughly, I probably would have done more due diligence in trying to ensure that I had them.

“The truth was that I was more interested in the process of writing and hearing my songs transformed than I was in simply writing some catchy ‘ear candy.’ Naive on my part. We all thought that ‘Angel Spread Your Wings’ was a hit from ‘Breezy Stories’ and that ‘Quits’ – with Linda Ronstadt singing harmony – was also going to garner airplay. For whatever reasons, they weren’t hits.

“The problem with not having a formula, or wanting one, is that you can’t guarantee the success of a creative effort. It’s the creativity that really counts. Besides, creative formulas are the most boring things in the world. Novelty and quality of inspiration and execution are what make the artistic process interesting, n’cest pas?”

O’Keefe says he left Hollywood the day John Lennon died. To him, an era had truly ended.

“I spent time in the ’80s developing some long-neglected personal interests and writing,” he said. “I recorded ‘The Day To Day’ for a small, independent company that ran out of funding about halfway through the process. I lost interest in recording for a while after that and only re-released ‘The Day To Day’ as ‘Redux’ because the company releasing it thought it still had some life in it.

“I worked as a contract writer for a couple of different publishers during the ’90s until the inspiration for The Songbird Foundation came to me and that has been my major focus since 1997.”

He founded the foundation to help protect songbirds being destroyed by deforestation caused by aggressive sun-grown coffee practices in Latin American countries.

“In early 1997, I read an article on how nonsustainable coffee agriculture was destroying habitat in the wintering grounds of the migratory birds that return to us each spring and it hit a chord within me,” he said. “That night I had a ‘lucid dream’ in which I heard the dawn chorus of songbirds beautifully singing. When I woke, it was still dark and the dawn only brought the chorus of resident birds.

“I began to follow a thread that led to increased awareness of the songbirds’ plight. With the help of friends like Bonnie Raitt, Jackson Browne and others, I was able to help take the issues to the public and by working with other organizations we have helped create an awareness that is growing and points up the faulty thinking in nonsustainable agricultural practices. By making sustainable purchases – in the case of coffee by purchasing shade-grown, organic and Fair Trade brands – we not only protect habitat but we help ensure fair, living wages for the people who grow our food. If we want to leave something for the generations to come, we must purchase wisely now.”

O’Keefe says he was “edged” back into recording by Nashville songwriter Jon Vezner, who had a digital recording system in his basement. Along with Kathy Mattea’s engineer, Mick Conley, they oversaw O’Keefe’s comeback LP, “Runnin’ From the Devil,” in 2000.

“There was a great sense of enthusiasm from all involved that made the recording process fun again,” O’Keefe said. “Miramar Recordings was a Seattle-based company that was in the process of reforming, and I wanted to work with a company I could have a more personal relationship with. Unfortunately, they went bankrupt not long after the release of ‘Runnin’ From the Devil’ and that, accompanied by some complications I had from a surgery gone awry, made touring problematic. Recording makes sense as an artistic endeavor because the process avails you the canvas to flesh out musical ideas. You need the promotion and production aspects to make it a success, however.”

“Like any recording I’ve ever made, the goal is to get as many people to listen and like the recording as possible. Very simple really,” he said. “We all want people to appreciate and authenticate our artistic endeavors. The ultimate goal, I’d guess, is to be allowed to continue the process. More canvas, more paint, and more people interested in purchasing the work.

“Through the miracle of modern electronics, it is available on the World Wide Web and it is getting heard all over the world. Not by millions, but hope springs. I’ve always believed that quality work will find its audience. Hey, look at that guy Van Gogh. If he’d lived long enough, he’d have been a very rich man.”

THE FIRST RECORD I EVER BOUGHT: “The first real and important record I ever bought was ‘Here’s Little Richard’ on Specialty. It’s one of the purest recordings ever made and is incendiary in its power. I saw Little Richard as a teenager and his show was magical and mysterious. The power that is in those early recordings has never been matched in rock ‘n’ roll.”

THE FIRST CONCERT I EVER WENT TO: “Again, I think the first concert – they were called shows then – I went to see was Little Richard, although in that same period I also saw Fats Domino and Gene Vincent, who were also artists that I found intriguing and compelling. They played at a roller rink in the small town I lived in and it was a seminal and long-influencing experience hearing and seeing them perform. I had all their recordings and they were magical beings to me.”

THE WORST JOB I’VE EVER HAD: “The worst job I ever had was working in the mail room at Boeing. I had shattered my femur in a motorcycle accident the year prior and was in constant pain. The mail room job required a great deal of time on my legs and considerable overtime that had to be worked. The pain became overwhelming one day, and I just walked out. Pain has been one of the constants that propelled me into a songwriting career and I suppose it’s an essential to art. Technique and understanding are the great palliatives as is the reward of the audience’s appreciation.”

ON THE WEB: www.dannyokeefe.com. Hear here. 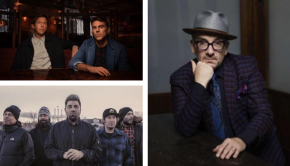